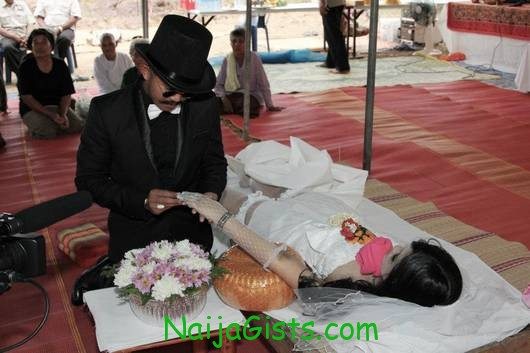 A 28 year old Thai Man by the name of Chadil Deffy went ahead to marry his girlfriend after she died in a car crash. naijagists.com

A wedding is considered the most special event of a woman’s life and it was no different for Sarinya. She was eagerly counting the days to the moment when she would finally say ‘I do’, along with the love of her life, but fate had other plans for the young couple. Merely days before the wedding, Sarinya was involved in a car crash, leaving her severely injured. She still could have been saved with timely medical attention. However, the doctors made her wait for 6 hours due to an overcrowded ICU instead of transferring her to another hospital. During this time, she succumbed to her injuries and passed away.

Deffy and Sarinya had been together for 10 years, before they finally decided to settle down. They had postponed the wedding several times, due to busy schedules and the fact that Deffy wanted to complete his education before he got married.

However, after Sarinya’s untimely death, he couldn’t let her go without fulfilling her deepest desire. So, he decided to marry her anyway.

On the 4th of January, in Buddhist ceremony, Deffy married the corpse of his girlfriend. The event took place in Surin, a city in northern Thailand.

During the ceremony, he expressed his devotion and deep love for Sarinya. Several friends and relatives attended the wedding, and it was even aired on national television in Thailand.

The story, along with pictures from the wedding has now become an internet sensation, sparking several debates.

The images show Deffy kissing the forehead of his girlfriend’s corpse and placing a wedding ring on her finger. 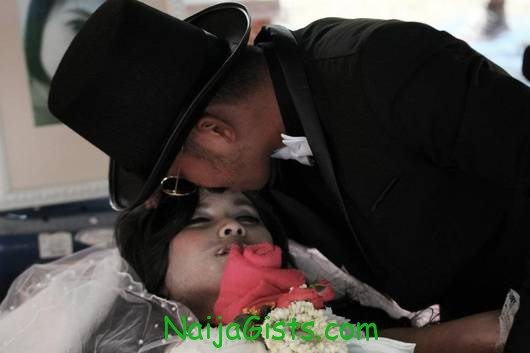 Hopefully her soul now rests in peace, having received her final wish. As a tribute to their immense love, Thai Youtube users have created various video collages, like the one below. A Facebook pagededicated to the two has so far been “liked” by over 30,000 people.