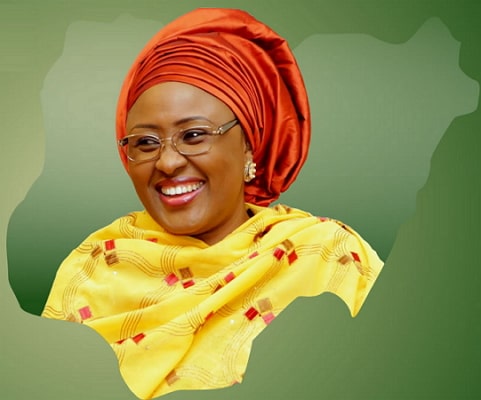 The wife of President Muhammadu Buhari has been out of the spotlight for weeks, conspicuously absent in several events she ought to have attended, making tongues wag about her whereabouts.

There are some speculations that she is in London. Aso Rock has not confirmed this.

But she was known to have jetted out of Nigeria for Hajj in August and she has not come back since then. Thus she was not around at the swearing-in of Buhari’s ministers.

The last time she was seen in public was at a dinner on Sunday June 16 in Aso Rock to celebrate the female participants of the Democracy Day parade.

Since then, most of her public functions were performed by her surrogate, Dr Hajo Sani, her Senior Special Assistant.

Dr Hajo Sani: has been representing Aisha Buhari in many events

At the inauguration of Ambassador Tijjani Muhammad-Bande as the President of the 74th UN General Assembly, Hajo Sani came with a presentation from the First Lady. Hajo Sani also attended a reception for Bande.

Hajo Sani also represented Aisha at the UN High Level Meeting on Tuberculosis at the UN Headquarters, New York on Sunday, 22 September. And she held forte too as the Global Empowerment Movement held the Blessings of Africa Iconic Champion of Change Award on 24 September.

Nigeria’s First Lady was equally absent at The Organization of African First Ladies for Development (OAFLAD) meeting in New York, a body she inspired into existence.

Where could she be?

Aso Rock said there is no cause for concern and indeed shot down suggestions her absence has anything to do with her loss of relevance in Aso Villa. She had openly condemned the hijack of her husband in his first term by a “cabal” and even vowed never to vote for Buhari’s second term.

The Punch quoted her Director of Information, Mr Suleiman Haruna, debunking all manners of speculations.

He said the President’s wife has the freedom to travel to wherever she wanted, as a free citizen.

Haruna said Aisha as a free Nigerian who is not a government official, could travel for private engagements both within and outside the country, adding that the reasons for such trips must not be tied to “needless speculation or rumours.”

“It’s a free world and people have been speculating about everything in this country and it is allowed.

“She is a free Nigerian and does not work for the government. So, if she decides to stay somewhere in her village for two months or to go somewhere and stay for two months, why should it become a national issue?

“She is a free Nigerian and has absolute freedom to move round for however long she wants.”