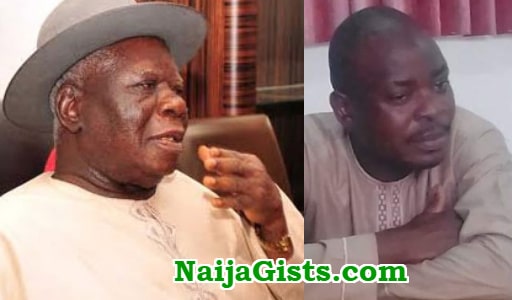 The man who gave Police information that arms and ammunition are in the house of elder statesman, Chief Edwin Clark said he got the information from a taxi driver.

45-year-old Ismail Yakubu is a council member at the palace in the district head office of Waru, FCT.

He said he gave the police the information because the police always tell residents to report any suspicious movement.

The informant disclosed this at the Force Headquarters in Abuja on Wednesday when he was paraded.

Narrating how he got the information that arms and ammunition were in Chief Clark’s house, he said:

“I hail from Waru village in Apo resettlement and I am 45 years.

“I am a council member of the palace in the district head office in Waru.

“I appreciate the time given to me. The point is that I was going to Asokoro on Monday exactly around 4pm. I was called to come and receive a message at the back of ECOWAS. I took a taxi from Apo roundabout.

“When I got to the back of ECOWAS according to the description of the man that called me to come and receive the message, I saw a street called Haile Celestial street.

“That was the street I was going. There is a Catholic Church uncompleted building there and that was where the man asked me to meet him.

“When we were on our way, I was in front and two other passengers were in the car. I noticed that the whole street was blocked and then I began to ask questions to know what was happening.

“It was then the taxi man said the street is where Niger Delta people live. I probed further to know why the road was blocked and rowdy. He then pointed out to me to see the truck entering the compound, the compound was House 43.

“The truck was a white Hilux van and it was sealed. The driver said the road was blocked because the van was trying to enter the compound.”

“The driver said the van was filled with ammunition. As an indigene of FCT and hearing the information. I thought to myself that why ammunition in FCT because residents of FCT are peace-loving people. I said I cannot take that. I asked how sure he was and he said he was very sure and that was why the whole area was blocked.

“That was the same point I dropped from the taxi and I paid him his money. I carried my phone and called the person who called me to come and receive message.

“The message the person brought was a nylon bag containing Irish potatoes because he came from Jos. I told him what the taxi man told me and being Monday, had it being I had access to STS office, I would have reported that issue immediately on Monday.

“On Tuesday morning, I met Inspector Sada and I narrated what I saw. I told him that I got the information from a taxi man. I told him the address and they went there to investigate.

On how he felt about the turnout of things, he said :

“The Police said when you see a suspicious movement, you should always report to the Police. I don’t think I have done wrong in such doing.”

Yakubu also said he did not see the residents of the house offload arms and ammunitions.

The Force Spokesman, Ag. DCP Jimoh Moshood said the IG directed the immediate detention of the four police personnel that carried out the unauthorised search.

The personnel of the Force who carried out the search are; ASP David Dominic, Inspector Godwin Musa, Inspector Sada Abubakar and Inspector Yabo Paul.

Moshood said the officer who led the team has been queried adding that the three Inspectors are currently undergoing orderly trial for the appropriate punishment to be meted out to them.

“There are procedures to be followed before executing the search warrant and the lapses is on their side and that is why they are being investigated.”

He however noted that the police has the statutory rights to execute a duly obtained search warrant in any premises where it has actionable intelligence or information that incriminating items or exhibits used to commit crime or about to be used for criminality with the aim of recovering them to prevent the Commission of such crime.

On the likely punishment that would be meted if found guilty, Moshood said: “Those who will find them guilty will give the punishment they feel they deserve.

“For the Inspector and Rank and File; the adjudicating officer will take care of that and the punishment would be subject upward or downward depending on the culpability and involvement of such an officer but for a superior Police officer, after the query, the Force disciplinary committee will listen and cross-examine an officer for whatever query he has been issued.

“The punishment would then be finalised and passed to Police Service Commission who are the final determinant in the matter.”

Moshood also said the informant would be arraigned in an undisclosed Abuja court for giving false information that misled Police action in the matter.

Bloodbath As Fulani Militants Kill 5 Miners At Mining Site In Plateau
Cancer Survivor Killed By Gangsters 4 Hours After Moving To Chicago To Do Ph.D