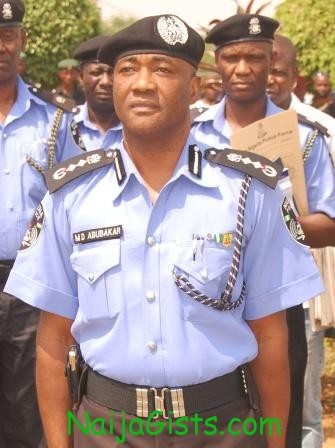 Maryam died at 5 a.m. this morning immediately after returning from hospital, said a family source.

We learnt that at 4 a.m. this morning, the IGP had called Kano from Abuja to gate an update over the wife’s illness.

Faced with the mounting insecurity laced with Boko Haram insurgence, IGP MD Abubakar’s mood at the cemetery and his family home this morning depicted that of a man in deep sorrow.

Clad in white brocade and cream-colour Hausa cap, MD Abubakar who flew into Kano this morning to pay last respect to his departed heart-throb, held back tears as he joined sympathizers to pray for the repose of Maryam’s death at his family house located on Gwandu Albasa, near the old Bank of the North building.

“I must tell you that Oga was devastated upon hearing the death of Madam. He wept silently; but you know that he is a man that is so strong that he can adjust to any condition,” one of IGP’s aides who insisted that the sudden departure of his wife will not affect his performance as Police boss told P.M.NEWS.

According to PM news, early sympathizers at the IGP’s white house include police chiefs within the state and Abuja , politicians and Benin Republic ’s Honourary Consul to Nigeria , Alhaji Muktari Ali Daura.

Meanwhile, the dawn to dusk curfew in Kano , northwest Nigeria has been reviewed by an hour. Before the latest review today, the curfew was 7 p.m. to 6 a.m. but now 6 p.m. to 6 a.m.

The state commissioner of Police, Ibrahim Idris who confirmed the new curfew time to P.M.NEWS during the burial of IGP’s wife said the measure was taken to further tighten security in the state.

“We have to review the curfew as a way of tightening security. You are aware that all these things happen around 7 p.m. being the rush hour, so we have to bring it one hour backward to enable us tackle the issue effectively.”

CP Idris also insisted that only two civilians lost their lives during the attack on Naibawa Police station Sunday evening, adding that at about 5:30 a.m. today, “there was an attempted attack at Mandawari Police station. They came in a Jetta Volkswagen car, shooting sporadically, but our men over-powered them and chased them away. No life was lost and nobody wounded.”