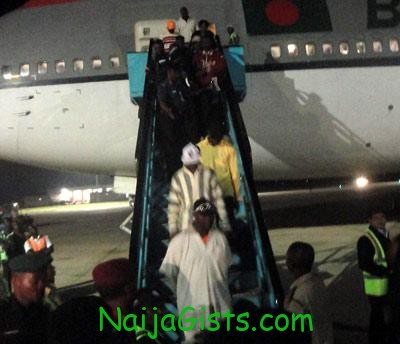 FG said on Friday that it had evacuated additional 177 Nigerians from Libya in spite of the rebuilding of that country.

The move became necessary following the need to protect Nigerians sheltered in various camps across Libya.

An earlier airlift in March saw the evacuation of more than 150 Nigerians at the beginning of the unrest which led to the termination of Moammar Ghaddafi’s 42-year rule over Libya.

Martin Uhoimobhi, the Permanent Secretary, Ministry of Foreign Affairs, said the airlift was jointly carried out by the federal government, the UNHCR and the International Office of Migration.

He said the evacuees were thoroughly screened to ascertain that they were actually Nigerians before the airlift.

“The whole exercise was based on consent; only those who voluntarily agreed to come back home were returned, and when they arrived at the Murtala Muhammed International airport in Lagos, NEMA officials were on ground to receive them,” he said.