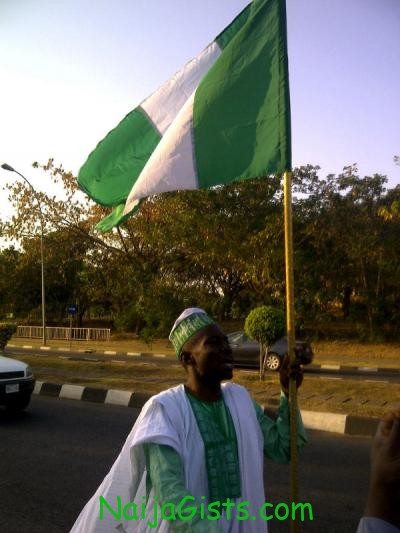 The very last time a group of young Nigerians, led by Wale Ajani, decided to go on a hunger strike to drive home their opposition to the fuel subsidy removal, they were dispersed by stern looking anti-riot policemen from the Unity Fountain.

However, Moses Oluwadare-Jesu has not been instructed by anyone to go on a hunger strike, nor has he also been harassed by security operatives yet. Rather, the residents of Abuja are bewildered by his form of protest; which involves marching around the Central Business District with a national flag and dressed in a white flowing gown and green Danshiki. naijagists.com

“I was instructed by God to go on a march to tell Muslims, Christians and even those who worship stone to unite and come together as one,” he said, adding that only a unified nation can tackle the inequality between the rich and the poor.

When asked long the march will last, he said: “God that instructed me will tell me when to stop.”

His form of protest has aroused the interest of residents. “We are happy and proud of what the man is doing, if only others can join him,” said a resident who did not want his name published.

AlKasim, a youth activist, works for the BBC World Service and is based in Abuja.