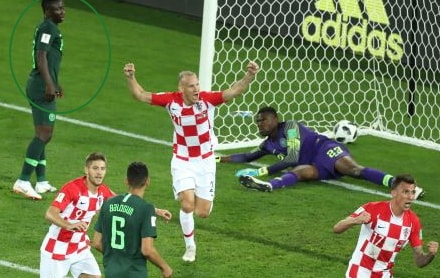 Nigeria’s Super Eagles started the 2018 World Cup campaign with a humiliating 2-0 defeat in the hands of one-time semi-finalist Croatia inside the Kaliningrad Stadium in Russia.

The Super Eagles went a goal down in the first half courtesy an own goal from Oghenekaro Etebo and Luka Modric converted a penalty to seal three points for the Europeans.

Nigeria’s number one sports newspaper, SportingLife guides you through the performances of the players with how they rated individually.

The Deportivo La Coruna reserve team goalkeeper made his first save after the Super Eagles have gone 2-0 down. A strange situation for the 19-year-old who saved a tame last minute one-on-one effort from Real Madrid star Mateo Kovačić. 6/10

The newly signed Brighton defender troubled the Croats during set plays and was good with playing out from the back but was guilty of leaving too much space for the forwards especially Andrej Kramarić. 5/10

Ekong was good on the ball and was strong in ariel battle in both penalty areas but was clumsy with his tackle on Juventus striker Mario Mandzukic which drew a penalty. 4/10

The FC Amkar Perm wing-back made a swift interception early in the game but never provided any support through the flanks in attack. 5/10

The Bursaspor defender was given a torrid time in the first half by Ante Rebić and most of the Croatian attacks came from the right side of the Nigerian defence. 5/10

He was unfortunate to get the own goal registered in his name but he had a good game and full of energy. The newly signed Stoke City player was one of the best performances on show for the Eagles. 7/10

The Leicester City defensive midfielder had an average game. Not his best in the Eagles colours. 5/10

Eagles Captain Mikel looked lively throughout the first half but lacked the killer pass to open the opponents. The former Chelsea midfielder failed to help dictate the pace of the match. 5/10

The Chelsea wing-back was the most fouled player on the pitch and it was mostly because he held on to the ball for too long. His final balls were not good enough at the times when he found himself free. 6/10

Iwobi did not influence the game like he normally does for the Eagles. The Arsenal midfielder had a shot blocked in the first half and found it even harder to unlock the defense. 5/10

The Changchun Yatai of China forward celebrated his 29th birthday but had limited service to cause any damage to the Croatians. 4/10

Musa came in for Iwobi but was not effective. He had a wayward cross which flew into the night skies.3/10

The former Manchester City forward replaced Ighalo and immediately had a shot off target. 5/10

The Crotone of Italy giant striker was on for just three minutes and it wasn’t enough for him to impact the game or get a rating. N/R