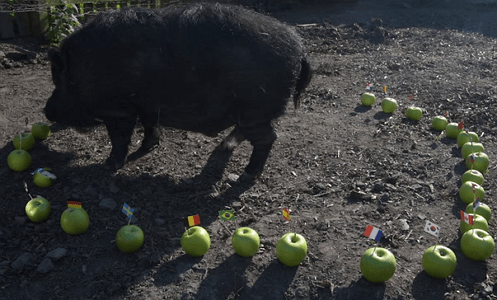 A pig name mystic Marcus has predicted that Nigeria, alongside Belgium, Uruguay and Argentina, will progress to the Semi-finals of the 2018 FIFA World Cup starting on Thursday in Russia.

Mystic Marcus has a 100 per cent track record of predicting sports results according to his owner Juliette Stevens, Daily Mail report.

‘For one football match he didn’t eat any of the apples and it turned out to be a draw. It’s really bizarre’ she said.

“I can’t remember which team it was but in the last World Cup there was a team that nobody thought would win a game – not in a million years and he got it right”.

The black micro pig has previously guessed the winner of the 2014 World Cup and the Wimbledon tennis finals by picking apples.

It also rightly predicted that Donald Trump to become the president of the United States of America and the Brexit campaign.

Now Mystic Marcus is putting his skills to the test once more by forecasting the semi-finalists for this summer’s World Cup in Russia.

Mystic Marcus expects Belgium, Argentina, Nigeria and Uruguay to make it through.

He made the predictions by gobbling up apples bearing the flags of the nations.

Juliette used 32 apples with flags of the all the participating countries and Mystic Marcus was made to eat the four semi-finalists. After eating Argentina, he sniffed out Saudi Arabia and Iran before choosing Nigeria

The other countries he picked out were Belgium, Argentina and Uruguay.

Mystic Marcus prediction is a reminiscent of the psychic octopus named Paul, which made accurate predictions in the 2010 World Cup.