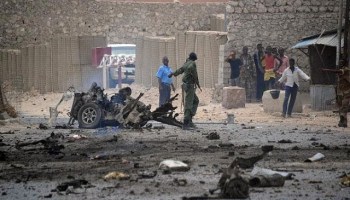 15 person died tonight , while 18 sustained injuries when three suicide bombers struck at a market in Konduga, Borno state, on Friday.

Bulama Kaka, a resident who witnessed the incident, told TheCable it occurred around 7pm.

Kaka said some meters away from where he was while the two other bombs were inside the market.

He said some traders were affected.

“We all ran for safety after the first thunderous blast occurred. Many people I know were killed in the attack,” he said.

An official of the State Emergency Management Agency confirmed the incident to TheCable, saying victims with minor injuries were receiving treatment at a hospital in Konduga.

He added that those who lost their lives and people in critical condition have been moved to the University of Maiduguri Teaching Hospital and Maiduguri general hospital.

Nigerian Hawker Stabbed By South Africans During Xenophobic Attack In Rustenberg
Iceberg Slim: The 3 Charms Juliet Ibrahim Used To Get Me