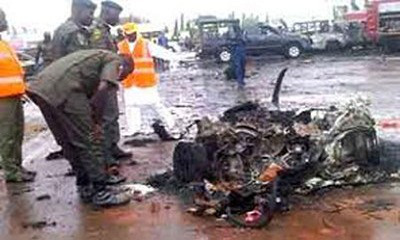 4 female suicide bombers died on Monday in the quiet town of Mafa in Borno state.

4 others were injured in the attack.

The spokesperson for the National Emergency Management Authority in the North-East, AbdulKadir Ibrahim, said that the attack was targeted at some members of the youth vigilance group.

He said when emergency workers got to the security checkpoint, mangled bodies of the suicide bombers and the body of a member of the youth vigilance group were seen.