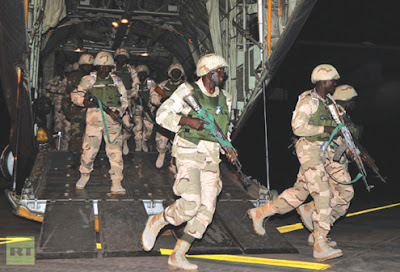 No fewer than 40 Boko Haram insurgents may have died in a crack down on the sect at the weekend by the Joint Task Force (JTF) in Borno State. Military sources hinted that the task force had burst a Boko Haram hideout at Zabarmari ward in Jere Local Government Area of the state, leading to a shoot-out with the insurgents.

“About 40 of the Boko Haram men died,” the source said. Also a vigilance youth group popularly known as Civilian JTF reportedly intercepted another set of three high profile Boko Haram men believed to be on their way to Jigawa State on attack mission at Borno Express Motor Park.

“The vigilance group later handed over the three suspects to the JTF unit, one of the suspects said they were from Bama Local Government on a suicide mission to Jigawa and other states in the North. In fact, one of them revealed that all their weapons have been transported to the target areas waiting for them to arrive before they were apprehended,” the source said.

Meanwhile, the JTF had commended the vigilance group for its cooperation and resilience in tackling the insurgents.

Spokesman of the task force, Lieutenant Colonel Sagir Musa in a statement yesterday said: “The Task Force supports and commends the heroic and patriotic efforts of citizens and residents of the state especially the youths who are daily rising against Boko Haram terrorism in the state.

“We wish to allay the fears and concerns of some members of the public as regards the activities of the youths popularly known as ‘Civilian JTF’ in the state,” adding that it had since “commenced the process of monitoring, guiding and regulating the activities of the vigilance youths with the view to making them operate within the ambit of the law.”

He said the move was to make them more useful in fighting Boko Haram terrorism in Borno State without becoming a nuisance to the society.