A fierce battle took place between the dreaded Islamic Sect, Boko Haram around 2am.

At the end of the gun battle, 9 members were instantly killed while 2 others were arrested. 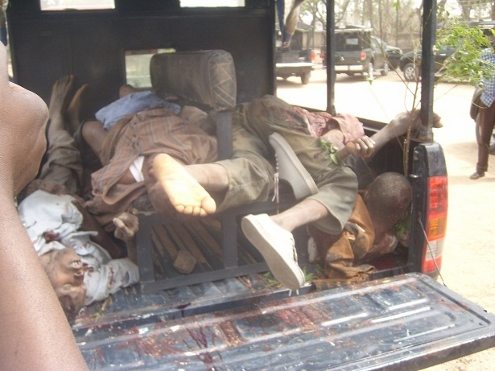 Read the detail news below

The Islamic militants in search of guns and money attacked a Unity Bank adjacent to the bombed police station, “but they did not succeed in breaking into the vault containing about N2 million.

“Within the hours of 2 and 7 a.m. on Wednesday, hoodlums went to Tudun Wada which is about 100 kilometers from Kano. They used explosives to blow up the police station in the area.

“They destroyed the DPO’s house, went to the police station and did the same. They also used explosives to blow up Unity Bank adjacent the police station,” the Army Chief told journalists, adding that the Islamic militants carted away rifles from the bombed police station.

“On getting the information, at about 1:30 a.m. security operatives mobilised, blocked Falgore, Jos and Kano axis because definitely, they came from Kano to operate and move back.”

The Army boss said during the gun-duel, the JTF over-powered members of the sect who came in three cars, and recovered the arms and ammunition stolen from the destroyed police station.

He stated that, “only God knows what these weapons would be used for if they had succeeded in carting them away. This hoodlums lack arms and they have been in desperate mood to get these items. That is why their best place of attack are police stations.”