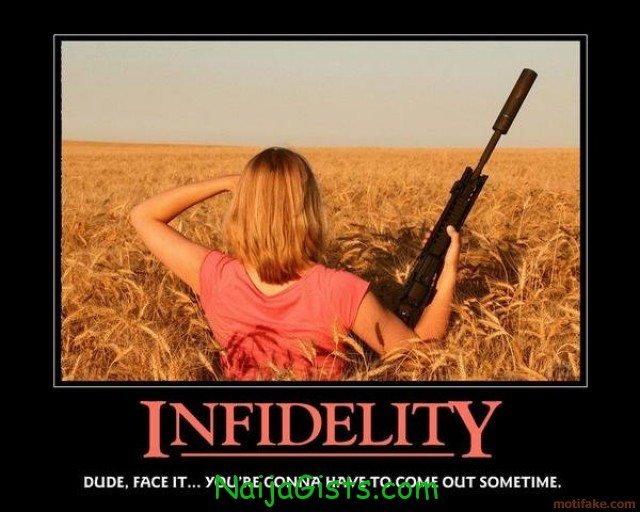 According to News Agency of Nigeria, the prayers by a trader, Mrs Jumoke Adesina, 39, for the dissolution of her marriage to Sarafa Adesina, were heard on Tuesday. naijagists.com

Jumoke had taken her husband of five years before the Grade A Customary Court, Agege, Lagos on the grounds of adultery, threat to life and lack of care.

The marriage, that was contracted in March 2007 in Lagos, was finally dissolved on grounds of adultery, threat to life and lack of care.

Jumoke, who lives at 19 Akinwumi St., Abule-Egba, accused Adesina of flirting, constant beating and planning to use her for money ritual.

The mother of two also accused her husband of not caring for her and the children.

“Sarafa doesn’t care for me and the children. He doesn’t know how we feed or pay for the children’s school fees.

“He brings home many women when I am not at home and sleep with them in front of our children.

“What baffled me was that I saw my pant inside a pot wrapped with red clothes in his wardrobe. I guess he wants to use me for money ritual,’’ she told the court.

She also accused Adesina of flogging her.

Jumoke said that because she loved him so much and did not want the marriage to break up because of the children, she had to keep everything to herself.

She said, however, that she had to seek the dissolution of the marriage after her husband sent her packing along with the children and brought another woman home.

“I want the court to separate us so that I will be free from him. I don’t love him anymore,’’ Jumoke told the court as she sought the custody of the two children.

Adesina, 44, who is also a trader and resides at 615, U-turn Bus Stop, Abule-Egba, Lagos, debunked her claims.

“Jumoke is a very stubborn woman who doesn’t listen to anything I tell her. Though I still love her, but she lies a lot,’’ he said.

The Court President, Mr Emmanuel Sokunle, said all efforts to reconcile the couple had proved abortive as the union had totally broken down.

He, therefore, dissolved the marriage and granted Jumoke the custody of the children and ordered that she must bring the children to court on the last Friday of every month for the father to see them.

He also ordered the husband to pay N10,000 monthly for the upkeep of the children and must be responsible for their school fees.

Adesina has 30 days to appeal the judgment, the court president said.