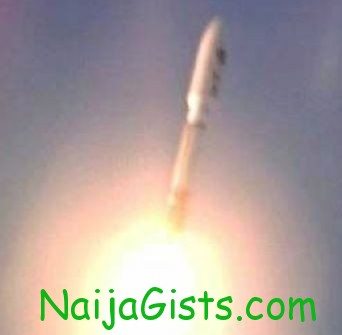 The Residents of Woji in Port Harcourt, the Rivers State capital scampered for safety at about 7 a.m. Friday when they heard a deafening blast at an uncompleted building. naijagists.com

The blast was from An Airforce fighter jet on routine maintenance at the Airforce mechanic hangar that accidentally fired a rocket.

The rocket travelled about three kilometres away and hit the uncompleted building located at 98, Woji street in Port Harcourt.

According to a correspondent who visited the scene of the incident reports that there was no injury or loss of lives but a minor damage to the building and Nisan car with Registration number Lagos DX 879 KRD was partly damaged.

Some residents of the area said they actually panicked erroneously believing that the Boko Haram Islamic sect may have fired the missile as part of their threat to make Nigeria ungovernable for President Goodluck Jonathan.

Members of the State Security Council at a media briefing attended by the Air Force Commander, Air Vice Marshal Abba Ali Zannah; the State Commissioner of Police, Muhammed Indabawa and the Director of the State Security Service, SSS, in the state, Olusegun Agbaje, said the incident was a rare and isolated one that could be as a result of mechanical, electrical or human error.

Zannah, while urging members of the public to go about their normal lives without fear, said the actual cause of the incident is being investigated and that the outcome of the investigation will be used to prevent similar occurrence.

“This morning at around 7:20 hours during a routine pre-planned inspection of an aircraft, a rocket flew out of the aircraft and pierced a building under construction at 98, Woji road.

“There was no injury to persons or any loss of lives. Members of the State Security Council jointly inspected the scene of the incident. This unfortunate incident is a very rare and isolated occurrence that can happen to an aircraft.

“We also learnt that that the Defence Headquarters had ordered a high powered investigation into the incident.

“The incident is a system failure that could be as a result of mechanical, electrical or human error. The incident is being investigated and we are confident that the outcome of the investigation will help step up measures to ensure that we forestall future occurrence,” he said.(P.M)