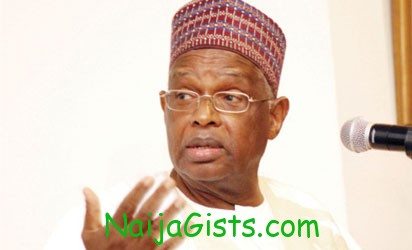 Dec 8, 2011 – Aminu Under Fire Over Proposed Dissolution of Christian Association of Nigeria,CAN

A statement credited to the former Petroleum Minister, Prof Jubril Aminu, calling for the dissolution of the umbrella body of Christians, the Christian Association of Nigeria, CAN, is generating a lot of heat in the polity with some religious leaders asking for sanction against the serving senator.

Prof. Aminu, who was reported to have flown a kite at the just concluded Arewa Consultative Forum on peace, argued that the dissolution of the Christian Association of Nigeria, CAN, had become necessary in order to stop Muslim elements from forming a parallel national body that might be called Muslim Association of Nigeria, MAN, which might not be in the interest of peace.

In a reaction, erstwhile National President of CAN, His Eminence, Sunday Mbang, urged the professor to go back to school, arguing that northern elements in his calibre were the ones responsible for all violent religious eruptions in the North.

His words: “Does that man know how CAN came about? Where was he when well meaning Muslims like the late Sultan of Sokoto was collaborating with the Christian body to find pathways to all the crises in that region? I worked with the late Sultan and together we achieved so much in the overall interest of the nation.

“If the man is calling for the dissolution of CAN then he needs to see a psychiatrist. I think he needs a lot of prayers and I will not hesitate to call on fellow Christians and Muslims in the country to pray fervently for him because it is obvious he needs a whole load of prayers.”

Also speaking in the same vein, Lagos Archdiocesan Director of Social Communications, Rev. Monsignor Gabriel Osu, urged the senator to stop fanning the embers of disunity by such irresponsible calls for acts capable of destroying the very fabric of the nation’s unity. naijagists.com

“It is unfortunate that a man of that high calibre could be associated with such a call. I am ashamed. I read that story and my first reaction was; where are we going in this country when a man of that stature can descend so low to make such divisive statement at a time we are all clamouring for the unity of this nation.

“We have co-existed in the country, has any Christian called for the dissolution of the  Supreme Council of Islamic Affairs of Nigeria, SCIAN? Why are people just fanning the embers of disunity and come to think of it, he is one of those making laws for the development of the country,” Osu lamented.

Also responding to the call, the chief national missioner of Al-Fatih-ul Qureeb Islamic Society of Nigeria, Alhaji Sulaiman Adangba, wondered why the professor made the statement, stating that the man might have been frustrated by the utterances of the CAN leadership over the desirability of Islamic banking in the country.

“I don’t know his intention because in Islam, there is freedom of speech but when any individual errs in his utterance he is corrected.

“I must tell you quite frankly that Pastor Ayo Oritsejafor’s utterances on Islamic banking had jolted the Muslims in the country because even if the Christians don’t need Islamic banking, he should not go to the extent of saying it is capable of Islamising the nation,” he stated.

Bishop Chukwuma, who is the Anglican Bishop of Enugu, told newsmen after leading a delegation of CAN officials in the zone on a condolence visit to the family of the late ex-Biafran leader, Dim Chukwuemeka Odumegwu Ojukwu, said if CAN was banned as canvassed by Aminu, all Islamic organisations in the country and the Muslim Haji operations should also be banned.

Senator Aminu had in a paper he presented at the Peace Confab organised by the Arewa Consultative Forum, ACF, in Kaduna on Tuesday, called for the disbandment of CAN, saying the disbandment would stop Muslim elements from forming a parallel national body that might be called Muslim Association of Nigeria, MAN, which may not be in the interest of peace.

But  faulting the former Petroleum Minister’s comment, the South East CAN leader said the Constitution of Nigeria guaranteed freedom of worship and association, stressing that CAN was an association of Christians that, among other things, played the role of a mediator in terms of crisis between the government and the larger society.

The cleric wondered why Aminu should singled out CAN as a group to be banned in the country when the association had played significant roles in dousing tension that would have degenerated into a major anarchy in the past.

He said: “CAN is the conscience of the nation. Any country without faith organisations like CAN, that country is doomed because the Bible says, ‘My people perish for lack of knowledge of God”.  Right now the ASUU strike that is going on, if CAN intervenes we will find solution. We have continually spoken against the ills in the society and that is why they are not comfortable with CAN.

“They are afraid of us telling them the truth about what is wrong in the country. Right now, we have commended the Senate for refusing the bill on gay marriage. CAN and some Islamic groups were in support of the Senate.”(vanguard)

Continue Reading
You may also like...
Related Topics:Aminu, association of Nigeria, can christian, dissolution, jubril