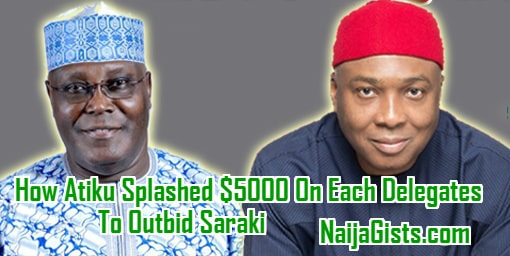 PDP members who were fortunate to be delegates at the party’s national convention which held in Port Harcourt on Saturday, have described the exercise as worthy.

This is because, they were said to have received thousands of dollars as bribes from some presidential aspirants.

As early as Saturday morning, some of the delegates said they already had up to $9,000 each while they said that they were still expecting more.

A particular aspirant, who had taken part in a presidential primary before, was said to have first offered the delegates $2,500 each in exchange for votes.

But when he heard that another aspirant offered the delegates $3000, he increased his own to $4000.

Our correspondent however gathered that the first aspirant later offered same amount of $4000, and action that forced the man who offered $4000 to increase his own to $5000.

Another aspirant was also said to have offered a mere $1000.

It was also learnt that some aspirants gave out naira to the delegates, while a source said states with large delegates got N50m, while others with fewer delegates got less.

However, investigations by our correspondents also revealed that other aspirants had also offered unspecified amount of money to the delegates.

Two delegates from the North-West, who spoke with our correspondents on condition of anonymity, confirmed they received cash.

One of them, who showed our correspondent the envelope that contained the dollar bills, said they decided to receive the gratification as a means of getting their share of the ‘national cake’

He said, “We are not going to sell our conscience because of the money. In fact, we saw it as an opportunity to collect what belong to us from these men.

Another delegate from the South-East, who also confirmed that he collected money even wished that the exercise could be called off and another one organise to enable him to make more money.