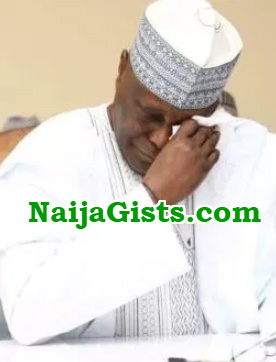 PDP Presidential Candidate Atiku Abubakar has admitted he lied after retracting his earlier story of speaking with the widow of Lt. Col Ibrahim Sakaba, killed by Boko Haram at Metele last month.

Atiku has changed the claim. He added that he only spoke with the slain soldier’s sister, Maryam and not the widow.

He had opened himself to widespread derision following his online post that he spoke with Seun, Sakaba’s wife.

But the woman denied she received a phone call from Abubakar and wondered why the 72-year old politician lied.

Abubakar has now set the record straight and apologized for the “erroneous communication”.

”Following the death of Lt. Col Ibrahim Sakaba during the Boko Haram insurgents’ attack on 157 Taskforce Battalion in Metele, His Excellency Atiku Abubakar’s staff has made efforts to get the contact of his widow to enable the former Vice President express his condolences over the loss of the fallen hero.

”Over the weekend, Atiku Abubakar was availed with phone numbers of Mrs. Sakaba and Maryam, younger sister of the late soldier, in the alternative.

”On Sunday, the former Vice President tried albeit unsuccessfully to contact Mrs. Sakaba but was able to eventually speak with Maryam, younger sister of the gallant soldier during which he expressed his deepest condolences to the family.

”However, this communication was erroneously communicated. The error is regretted.”