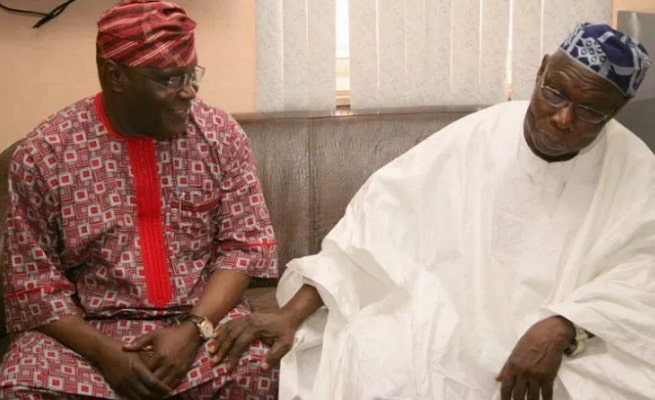 Atiku Will Perform Better As President, He Has More Integrity Than Buhari – Obasanjo Assures Nigerians

Less than 3 weeks to Feb 16 presidential election, ex-President Olusegun Obasanjo has reiterated his support for the presidential candidate of the Peoples Democratic Party (PDP), Alhaji Atiku Abubakar, stating that the former vice president would not be caged by any cabal if elected as president.

Obasanjo said the former vice president will be a president to all Nigerians and not a president to only the people who voted for him. He also extolled the leadership qualities of Atiku.

This is just as the former president gave scathing words for President Muhammadu Buhari, saying his supposed integrity is fake and that this has been proven by events of recent times.

Speaking as the special guest of honour at the quarterly business lecture of the Island Club, Lagos, where Atiku was the guest lecturer, Obasanjo affirmed that the PDP presidential candidate won’t allow anybody to seize his mandate.

“We now know that both Buhari and Atiku have issues and all of us as human beings have one issue or the other in different magnitude, but judging both of them empirically and for the task at hand, Atiku will perform much better than Buhari and he will seek for good and able people around the country and beyond and make use of them to achieve his mission and vision for the general good of Nigerians and the country.

“He will be a team leader, but will not allow the seizure of his mandate by a cabal. A system to prevent impunity and ‘I can do what I like’ attitude and action must be put in place for all concerned.

It is more than check and balance, rather, it is for the good of all stakeholders and equityholders.” Obasanjo said that the division the country is now experiencing stemmed from the moment President Buhari said that only those who voted for him would enjoy government patronage. The former president noted that the difference between Atiku and the incumbent president would be that the former vice president would be president for all Nigerians and not just for those who voted for him alone.

“I have been called names because of my position on Atiku Abubakar, the Waziri Adamawa. Everything I have said as far as I have knowledge of Atiku, I have not retracted and I stand firmly by them because they are, to the best of my knowledge, true. And neither has what I have said and written about Buhari been controverted, if anything, they have been confirmed and proved beyond any shadow of a doubt.

“But Atiku has done three things, which are absolutely imperative for a leader to be followed and believed. First, know who you are and present yourself as you are – a human being in blood and flesh and susceptible to human mistakes and human frailties.

Don’t cover up with a sanctimonious veneer of bogus integrity, incorruptibility, uprightness, goodness and false figures and statistics, all of which are contrived to deceive, to cheat, to plunder and to destroy.

“Atiku never claimed to be a saint and I never described him as such. I will never so describe any human being alive, let alone calling him a messiah. On an occasion in the past when I said that someone was not a messiah, some Nigerians, out of bad belle, were up in arms.

For me, as a Christian, the only Messiah I know and have is Jesus Christ and even then, the man aspect of Him was imperfect while the divine aspect of Him was perfectly messianic.” Talking about Atiku’s capacity to lead the nation, Obasanjo said that as a leader, one must understand the fundamentals of the problems that he or she had to solve, readiness to reach out to knowledgeable men and women for solutions that will benefit all humanities.

“Atiku has done one thing, which is necessary for a leader to be believed or followed. He made mistakes and had accepted his mistakes and asked for forgiveness. I forgave and I am sure Nigerians will do their part by voting for him. A leader should be susceptible to mistakes.

“When you have corruption under your nose, you are busy preaching fight against corruption! Atiku had not claimed to be a saint and I did not describe him as such.

He has accepted his mistakes and that is what a good leader should do and not look for someone to pass the buck to,” the former president said. Picking another point of leadership he observed from Atiku, Obasanjo said:

“A leader must be honest to himself and to the people he serves or he wants to serve. He must identify and acknowledge his situation, mistakes, shortcomings and inadequacy; show remorse where and when he has erred, seek forgiveness and repent; and not passing the buck or keep blaming others and fail to accept responsibility.

“Atiku accepts responsibility for his mistakes, shows remorse and seeks forgiveness from his political party and subsequently from Nigerians. He asked for forgiveness from me and as a believer, a Christian as such, I forgave him in accordance with the teaching and instruction of my saviour. “As a leader, you must understand the fundamentals of the problems you have to solve and be courageous, visionary and ready to reach out sufficiently to build a credible team of experts, knowledgeable men and women, concerned and interested citizens and noncitizens to work hard and tirelessly for solutions that will benefit all Nigerians and, indeed, Africans and humanity. “He must have ability to build a credible team, lead them, listen to them and give them enough leeway to achieve and make a meaningful contribution without abdicating his responsibility.

He must be accessible to them. “From my personal knowledge of Atiku, he has these qualities. I must reiterate that Atiku is not a saint and who is? But from what I know of Atiku, he will be a performer in all respects. I can say that again from my personal experience.

He knows the problems and he handled some of them or similar in the past.” Obasanjo stressed that since he was never away from the country for over 104 days at a stretch, it was not easy for anyone to know he devolved power to his deputy as president. “One of the most ridiculous claims I have heard on these issues is that I did not give Atiku chance to preside over the Federal Executive Council because I did not trust him. That was not correct because he had occasions to preside on a few times that I was out of the country on duty.

On those occasions, he was in charge of the Federal Executive Council meetings. “No Nigerian Chief Executive has devolved to his deputy as much as I did to Atiku. I did not need to designate him acting president because the constitution is clear, once the president is not available, the vice-president automatically acts with full powers and he consults where and if he considers it necessary.

But since I was not absent from home for 104 days at a that Atiku actually stood in for me whenever I was out,” he said. In his lecture, Atiku said Nigerians should reject the status quo and bring in a leader who has a history of economic reform and political transformation in the February 16 presidential election.

The PDP candidate, who reviewed the nation’s economy in the last four years, stated that the opportunity to change the course of history and rebuild Nigeria begins with the coming presidential election. Atiku listed 10 key areas he would pay special attention, if elected, which would define the policy direction of his government. According to him, there has been “a significant drop in investor confidence on the Nigerian economy,” in the last four years due to the actions or inactions of the All Progressives Congress (APC)- led Federal Government.

He regretted that there has been significant decline in capital importation in the country since 2015, resulting in Ghana, a country with just 14 per cent of Nigeria’s population, attracting more foreign direct investment (FDI) than Nigeria. “In order to reverse the trend, our economic policies will be more coherent, consistent and, therefore, more predictable by the business community.

Nothing could be more threatening to investment flows than an environment that is full of policy flip-flops,” Atiku noted. The former vice president also promised to support the private sector by undertaking reforms to unleash its growth potential, noting that #TheAtikuPlan recognizes the private sector as the engine of growth of the economy. “A strong, productive and pro-growth private sector is needed to create wealth, generate employment opportunities and help fight poverty. Atiku said he would liberalise the economic space and privatise all ailing enterprises.

Continue Reading
You may also like...
Related Topics:Buhari, obasanjo