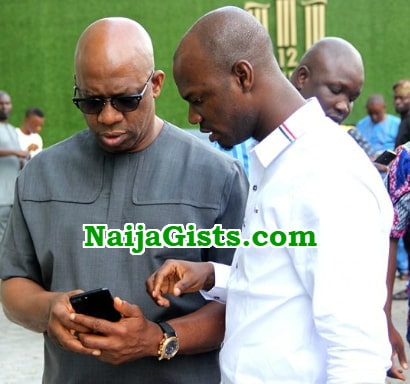 F-SARS operatives took over Abeokuta today following a foiled attempt on the governorship candidate of the All Progressives Congress (APC), Prince Dapo Abiodun and his running mate, Engr. Noimot Oyedele – Salako in Mokola – Elega area of the state capital by suspected political thugs.

The armed policemen and SARS were deployed by the Commissioner of Police, Ahmed Iliyasu, to the seedy Elega area and other flashpoints to restore normalcy and forestall further outbreak of violence, the Police Public Relations Officer, Abimbola Oyeyemi, told The Nation.

Abiodun and his running mate were attacked by thugs wielding guns, cutlasses and cudgels after blocking their access way with cars on approaching the Mokola junction near Akomoje in Abeokuta North Local during campaign tour of the area.

They later opened fire on his campaign train and smashed things on sight.

There was chaos, tension and pandemonium at the rustic neighbourhood as security Operatives in the convoy of the APC governorship candidate fired repeatedly into the air to scare the attackers away.

They also cleared the obstructions for quick and safe evacuation of Abiodun and the running mate from spot, but the attackers, it was learnt, audaciously held on to the reign of terror momentarily before they beat a retreat.

In the pandemonium and ensuing stampede, some of the fear-stricken party members, supporters and innocent passers-by fell on one another as they scampered to safety when gunshots rang out repeatedly.

It was learnt the assault was allegedly sponsored by a federal lawmaker from Ogun Central, who is a candidate of the Allied People’s Movement (APM), who was allegedly sighted fleeing the scene when the situation took a worrisome dimension.

It was further gathered the attackers having been dislodged at the Mokola – Elega area later regrouped by noon and stormed the junction of Ori – Omi Sokori area.

They threatened Abiodun to emerge from a stakeholders’ meeting at Akin Olugbade Social Centre, Abeokuta but his supporters resisted them.

The prompt intervention of more detachment of armed Policemen hurried to the scene, saved the day as the suspected thugs were chased away.

Reacting to the latest attack on him, Abiodun said:

“When we were approaching Mokola Junction in Abeokuta North Local government, we saw some group of people approaching us, we realised that they were fully armed.

“Suddenly they started shooting. Thank God for the gallant policemen who were on ground and rose up to the occasion and chased them away.

“If not for them, only God knows what would have happened today. It is unfortunate that our politics has gotten to this level where it has become do- or- die affair.

“We should rather canvass for votes and endear ourselves to the people. That is the only way that we would have peaceful election.”

Atiku Will Perform Better As President, He Has More Integrity Than Buhari – Obasanjo Assures Nigerians
Soyinka To Nigerians: Don’t Vote For Buhari Or Atiku, Nigeria Needs A New President