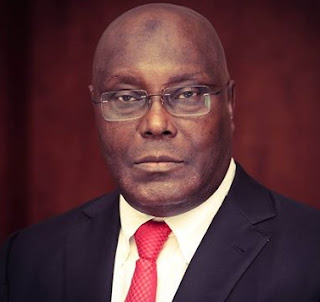 Thursday Nov 30, 2017 – How Atiku Has Been Jumping From One Party To The Other To Realize His Ambition

His ambition to lead the country dates back to 1993. Then, he had age and the support of those that matter politically on his side. He was in his late 40s and he was a close ally of the master political strategist, the late Maj-Gen Shehu Yar’Ardua whose structure, the Peoples Democratic Movement (PDM), he would have used to clinch the presidential ticket of the Social Democratic Party (SDP), the other half of the National Republican Convention (NRC), which made up the two parties decreed into being by the Babangida junta.

Atiku Abubakar threw his hat into the ring long before the late Bashorun M.K.O. Abiola, who eventually emerged from the SDP convention in Jos, Plateau State, as the party’s standard bearer in the June 12, 1993 presidential election, which was annulled by Gen Ibrahim Babangida. Atiku reluctantly withdrew from the race after being prevailed upon by Yar’Adua, who had initially given him the nod to run.

Since 1993, Atiku has matured politically, building bridges across the country in his determined bid to be president. When the country prepared to return to democracy in 1999 he oiled the old PDM machinery and moved into the Peoples Democratic Party (PDP). He was set to fight for its presidential ticket when circumstances intervened. Some retired generals, who once ran the country, felt that a member of their constituency should take the first bite at the plum job. After a long search, they settled for Gen Olusegun Obasanjo, who was then in prison.

The Obasanjo presidency faced challenges within because of Atiku’s ambition. Atiku had won election as Adamawa State governor and was waiting to be sworn in when Obasanjo picked him as his running mate. But he was not satisfied being number two. He was reportedly plotting to be president. His relationship with Obasanjo became sour because of this. The presidency became divided and the crack was visible during the countdown to the 2003 election. Atiku, with the backing of PDP governors, who did not see eye to eye with Obasanjo, was ready to challenge his boss for the party’s ticket. The crisis was somehow managed and they ran again on the same ticket. But the seed of enmity was forever sown between them.

To realise his ambition, Atiku has been jumping from one party to the other. In 2007, he dumped PDP for the Action Congress (AC) when he was deprived of the then ruling party’s presidential ticket. When Obasanjo heard of his plan to contest the election on AC’s platform, he sneered: I dey laugh o. He lost the election to former President Umaru Yar’Adua, who died in office in 2010. Towards the 2011 election, he ran back to PDP when he realised that AC, which metamorphosed to Action Congress of Nigeria (ACN), will not give him its ticket. The party fielded the former anti-graft czar Nuhu Ribadu, who lost to former President Goodluck Jonathan.

Atiku found his way to the All Progressives Congress (APC) before the 2015 election when it dawned on him that PDP would give Jonathan a second term ticket. The former president lost to President Muhammadu Buhari, who is likely to get a second term ticket for the 2019 election. Having seen the handwriting on the wall, Atiku last week left APC. It is certain that his next destination is PDP, which has been swimming in crisis since it lost power in 2015. Atiku’s ultimate desire is not only to pick PDP’s ticket, but also to become president. Getting the ticket may not be easy considering the various interests within and outside the party.

Many from the north are also interested in the ticket and it is certain that they will give Atiku a run for his money. Can he get other aspirants to subsume their interests under his? Won’t his coming further polarise the party? Of what electoral value really is Atiku? Does he have what it takes to lead PDP to victory in 2019 if he eventually joins the party? Besides, he has a big hurdle to clear in Obasanjo, who though no longer a card carrying member of the party, still packs a lot of weight within the fold. Will Obasanjo bury the hatchet and allow Atiku be? Can Jonathan, who is propping up Atiku, get Obasanjo to change his mind about the former vice president, who will be 72 by the time of the 2019 election? It will indeed be interesting to see how things play out for Atiku in what appears to be his very last chance at having a shot at the presidency.

Continue Reading
You may also like...
Related Topics:Atiku, nomad, political