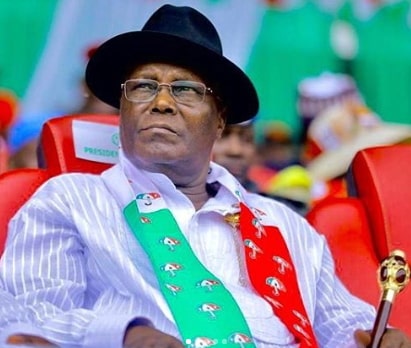 PDP Presidential candidate, Alhaji Atiku Abubakar said he would not congratulate the President because the election was not free and fair but marred by many irregularities.

The former Vice President therefore said that he would challenge the outcome in court.

Atiku, in a statement he personally signed early on Wednesday morning, said,

“If I had lost in a free and fair election, I would have called the victor within seconds of my being aware of his victory to offer not just my congratulations, but my services to help unite Nigeria by being a bridge between the North and the South.

“However, in my democratic struggles for the past three decades, I have never seen our democracy so debased as it was on Saturday, February 23, 2019. 2007 was a challenge, but President (Umaru) Yar’Adua was remorseful.

“In 2019, it is sad to see those who trampled on democracy thumping their noses down on the Nigerian people.

Recall that the Chairman of the Independent National Electoral Commission, Prof Mahmood Yakubu, on Wednesday morning declared President Buhari of the All Progressives Congress as winner of the election, having scored 15,191, 847,while Atiku polled 11,262,978 votes.

Yakubu, while declaring Buhari winner, put the total number of valid votes at 27,324, 583.

But Atiku in a statement titled, ‘Democracy will not be emasculated in Nigeria,’ insisted that there were predetermined malpractices in many states.

This, he said, negated the results announced by the commission.

Atiku also wondered how states that were ravaged by terrorism could generate much higher voter turnout than peaceful states.

Continue Reading
You may also like...
Related Topics:Atiku, Buhari, congratulate