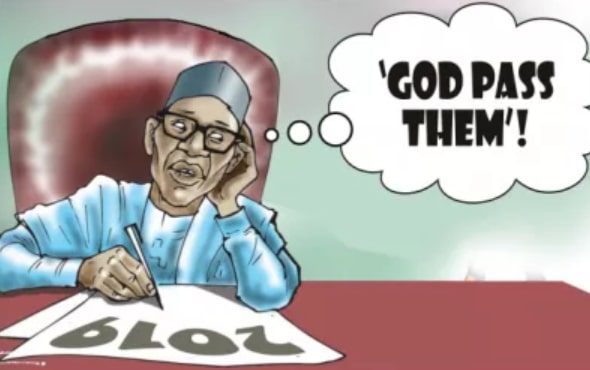 Buhari Has 3 Months Left To Rule Nigeria, Atiku Is Our Rightful President – CUPP

We won’t recognise Buhari as president beyond May 29 – CUPP

Meanwhile, the Coalition of United Political Parties has vowed not to recognise Buhari as Nigeria’s President beyond May 29, 2019.

The CUPP said the opposition parties would ensure, within civil means, that Buhari did not enjoy what they called a stolen mandate based on his declaration as the winner of last Saturday’s presidential election.

The coalition’s national spokesman, Imo Ugochinyere, made the political parties’ position known in a statement in Abuja on Wednesday.

Ugochinyere urged Nigerians to continue to support the opposition parties in their quest to retrieve the mandate for the rightful owner.

“The opposition rejects the cooked and panel-beaten figures and will not recognise General Muhammadu Buhari as carrier of legitimate mandate beyond May 29, 2019.

“We will do everything within civil and legal means to stop his enjoyment of a mandate soaked in the blood of his people.

“We hereby declare the President as the carrier of stolen mandate and urge all Nigerians to continue to resist within civil means this robbery and continue to support the opposition to retrieve this mandate and bestow it to the rightful owner. We shall never give up.

“We assure all Nigerians that the CUPP shall, starting from today (Wednesday), continue to lead the struggle to expose him and ensure what he stole is returned by the force of law.”

Describing Buhari’s victory as pyrrhic, Ugochinyere claimed that there was evidence nationwide that the 2019 presidential election was a clear departure from the electoral gains made in 2015.

He said it was glaring that the ruling All Progressives Congress stole votes and suppressed votes of the opposition to such an extent that the election was the worst since Nigeria’s return to democracy in 1999.

“This electoral robbery by the Presidency can only be compared to the electoral heists of 1963 and 1983.

“Buhari has insulted us all and our sensibilities. He has dared us all. He raped our electoral decency. In a bid to hang on to power with the crooks under him, he murdered democracy.

“Only a person who lacks understanding will congratulate a man who set out to burn down our electoral system. We ask, how do you accept this madness?

“Accepting this without as much as stiff resistance and exposing the fraud that was committed by President Buhari and the APC in this election is the recipe for future stealing of votes and massive voter apathy since voters will not have confidence in the system and this vicious cycle will continue perpetually. There must be an end to vote stealing.”

“His soldiers, acting on his instructions against the judgement of court, chased the PDP agents out of collation centres.

“Returning Officers were held at gunpoint with security forces watching, in Imo, and made to announce fake figures.

“In Akwa Ibom, votes were destroyed and cancelled to reduce figures. In Lagos, he supported ethnic violence; votes for the first time were burnt because of President Buhari.

“Hundreds of thousands of citizens in Sabon Gari in Kano never voted because President Buhari ensured they never did because he was afraid he did not have their votes.

“He planned this onslaught on the people because he already knew he failed to perform and that the people had rejected him.

“Nobody was shot dead for ballot snatching, rather innocent Nigerian voters and citizens opposing this robbery were killed in Kogi, Akwa Ibom, Rivers, Delta etc by security forces.

“The only recorded incident of apprehension of ballot box snatchers was as a result of the implementation of Opposition Code 20 by citizens in Lagos.

“His audacity that he will rob us and remain President is most insulting. He can get an announcement but he cannot get our support. He can rule with the guns and continue to kill and maim but we must stand firm from now till the end.

“President Buhari is not the man we voted. Our President is dancing and celebrating on the rivers of blood of slain citizens,” Ugochinyere added.

He said it was clear to Nigerians why Buhari destroyed the Supreme Court and removed the Chief Justice of Nigeria, Justice Walter Onnoghen, illegally.

He said, “He knew he would rob the people and had to first make sure that justice would be denied the people from the illegitimate head of the Supreme Court.”