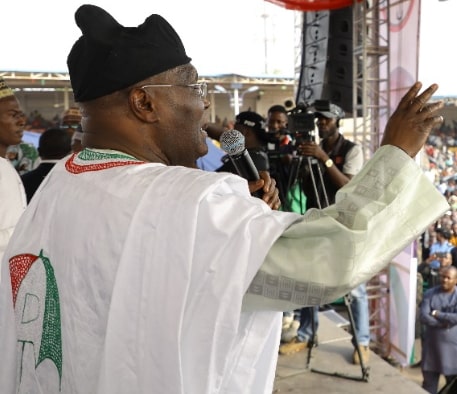 Atiku Vows To Defeat Boko Haram, Denies Plan To Give Up A Part Of Borno State To Boko Haram In Peace Deal

PDP Presidential candidate, Alhaji Atiku Abubakar has restated his commitment to the total defeat of the Boko Haram insurgents in Borno, Yobe and other parts of the Northeast geopolitical zone.

In a statement released today by his media Adviser, Mr. Paul Ibe Atiku said if elected, every terrorist caught will be tried in accordance with the provisions of the law.

The statement declared Atiku’s zero tolerance for terrorists, stressing that he has detailed his plan to equip the military to deal decisively with threats posed by Boko Haram insurgents to national security once and for all.

Atiku was reacting to a video clip allegedly being surreptitiously circulated by the Buhari Media Centre, depicting alleged plans by Atiku to cede parts of insurgency ravaged Borno State to Boko Haram in a peace deal.

“Our attention has been drawn to a video being surreptitiously circulated by the Buhari Media Centre, under a satanic pseudonym, ‘Make Nigeria Worse Again’, in which they falsely accuse the presidential candidate of the PDP, Atiku Abubakar, of planning to cede parts of Borno State to Boko Haram in a peace deal.

“This is completely false and only shows the level of dirty politics and fake news the Muhammadu Buhari administration is prepared to engage in in its desperation to cling to power despite its widespread unpopularity.

“For the avoidance of doubt, the only plans that His Excellency Atiku Abubakar has for Boko Haram is the total defeat of the terrorist sect once and for all.

“Atiku Abubakar is not one for ‘technical’ defeats. He has said publicly and privately that if he is elected, both Boko Haram and ISWAP would be wiped off the face of the planet.

“Indeed, former Vice President Atiku Abubakar has criticised the Buhari administration policy of releasing so called ‘repentant’ Boko Haram members and tied the resurgence of terrorism in the nation to that ill-advised program.

“It is worth noting however that this fake news video began circulating soon after Vice President Yemi Osinbajo commissioned the Buhari Media Center on Tuesday, January 8, 2019 in Gwarinpa, Abuja.

“It is very doubtful that this is a coincidence and we call on the public to be wary of such videos and other online propaganda from the Buhari Media Centre to discredit the PDP presidential candidate.

Continue Reading
You may also like...
Related Topics:Atiku, boko haram, borno, give