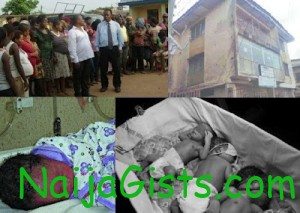 A baby making factory has been discovered in Akwa Ibom state where young mothers are paid a lump sum N70,000 to make babies to sell to ritualists. naijagists.com

According to Tribune, this mysterious baby making factory as unveiled by Uyo Police Force is packed with young girls who conceive, give birth and the babies later sold to suspected ritualists and other members of the public in Uruan Local Government Area of the state.

The new babies, we gathered, are collected from the young mothers as soon as they are delivered, even as each mother is paid N70,000 after each successful delivery.

The state Commissioner of Police Umar Gwadabe who briefed newsmen on the development and 1other breakthroughs recorded by the state police command, disclosed that the said illegal home is owned by one Dr Wisdom Mbaba and is located at Ekpene Ukim, in Uruan Local Government Area of the state.

Gwadabe said following a tip-off from a concerned citizen of the area, the police raided the place and about seven young women, between the ages of 18 and 20 were rescued from the said operation, while the suspected proprietor of the home, Dr Mbaba, escaped but his wife, Effiong, was arrested.

One of the girls rescued, Aniebet Okon Sunday, told Nigerian Tribune that she had gone there to abort a five-month-old pregnancy but the doctor told her to stay with him, promising that he would pay her for the baby, which she agreed to and was paid N70,000 after delivery. “My friend took me to Doctor Wisdom when I was pregnant and wanted to do abortion but the doctor said I should stay and give birth.

I did not even see the baby that I gave birth to. I don’t know if it was a boy or girl. It was taken away before I was able to stand up. But doctor gave me N70, 000,” Miss Sunday narrated. Nigerian Tribune gathered from reliable sources that young girls wishing to abort unwanted pregnancies were lured to the factory for abortion operation, after which the unwanted babies are negotiated and sold to ritualists by the factory dealers.

However, Dr Mbaba’s wife Effiong who is currently in police custody, admitted that her husband was a specialist in abortion but claimed he had stopped doing the business for some years now. Asked whether she was running the business with her husband she said, “No, I don’t know anything about the business. I run a shop where I sell foodstuffs and others things.” However, the state commissioner of police said his men had been equipped to contain any security challenges in the state.

These are heartless criminals that must be brought to justice.