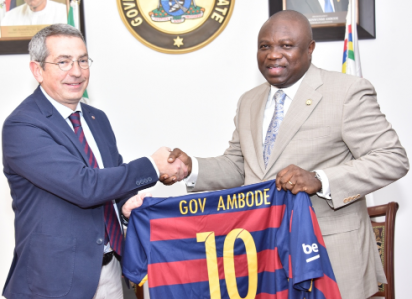 Bernat Villa, the Head coach of the Barcelona Football Academy in Lagos has outlined the school’s plans for Nigerian kids who registered within a week of the school opening.

The Spaniard, who was once in charge of the Barcelona academy in Spain, has his office at the Teslim Balogun Stadium, Lagos, and is assisted by Nigerian coaches.

“The aim of FCBESCOLA is to teach the kids the same way we teach in Barcelona using the same methodology and drills. For now we are having about 1,000 kids, out of which about 700 would eventually make it through to the school proper. I’m supported by some local coaches and I have explained to them our methodology; we are also teaching them our philosophy,” Villa said.

Villa added that Nigerian kids had awesome skills and could become future stars of the game, if properly groomed and guided.

“We’ve seen a lot of good players but the most important thing is for these players to be in good physical condition as their counterparts in Europe. If they can understand how we work and train, in few years, some of them can make it to top clubs in Europe and eventually their national team,” the coach stated.

On the difference between a Nigerian footballer and his European counterpart, Villa said, “The kids here (in Nigeria) are more of individual players, though they have good technical skills but they have problems technically and collectively.

“They are too individualistic, they always think they can take on their opponents and go alone with the ball and finish the ball by themselves. We have to make them realise they should play with the team.”