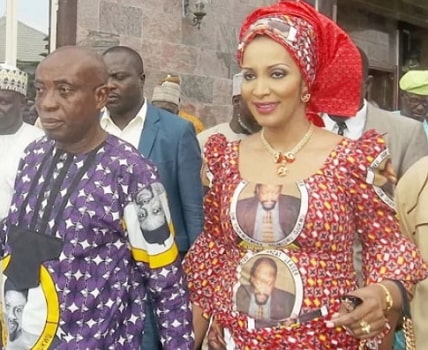 MASSOB, the Movement for the Actualisation of the Sovereign State of Biafra (MASSOB) is now jubilating over the failure of Bianca Ojukwu senatorial bid.

The group said Bianca lost because she disobeyed her husband, the late Dim Chukwuemeka Odumegwu Ojukwu, and the ancestors of Igboland.

A statement released yesterday by the National Director of Information, Edeson Samuel, hailed the decision of the All Progressives Grand Alliance (APGA) in denying her the senatorial ticket.

“The leadership of MASSOB, under Comrade Uchenna Madu, expresses its deep appreciation and gratitude to the leadership of APGA, delegates from Anambra South and Ndigbo in general for harkening to MASSOB’s call not to give Bianca Ojukwu ticket.

“We understand that some disgruntled and self-centered persons are behind her pressured political ambition, they wanted to deceive and use her perceived political position to enrich and draw attention to themselves.

“Though she is loved, honoured and acknowledged by Ndigbo as the wife of the Eze Igbo Gburugburu, still MASSOB can never allow Iyom Bianca Ojukwu to be rubbished or mesmerised by anyone or group.

“MASSOB warns that APGA should not be blamed or castigated for Bianca’s failure; she failed because she disobeyed her husband and our ancestors. Her failure is a divine act.

MASSOB, under Comrade Uchenna Madu, will never relent or derail in defence of the integrity, honour and respect of Dim Chukwuemeka Odumegwu Ojukwu.

“We advice the Igbo governors on the importance of establishing a human development centre in honour and memorial of Dim Chukwuemeka Odumegwu Ojukwu, a centre that will alleviate the sufferings of marginalised widows in Igbo land.”