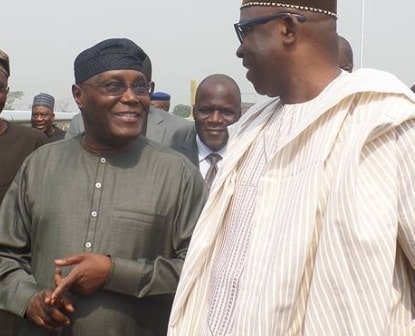 Ekiti Governor Ayodele Fayose has threatened to dump the PDP party following the emergence of ex VP Atiku Abubakar as the presidential candidate of the party..

Fayose in a statement said:

“We have no regret aligning with Governor Wike to support Governor Tambuwal for the presidential ticket and no apologies either.

“We kept the party alive and strong when most men became ladies. We never compromised. If any group feels it can do it alone, we will see how far they can go.

“I may renounce my membership of the party if the need arises.

“In the mean time, myself and others will continue with our consultations while watching the turn of events.

“We cannot but appreciate leaders that have intervened so far, but this release became necessary to avoid fresh crisis or misrepresentation.”

Fayose earlier declared interest in contesting for President but withdrew .

Fayose joined the PDP before the 2003 governorship poll which he won. He has been in and out of the party at various times.