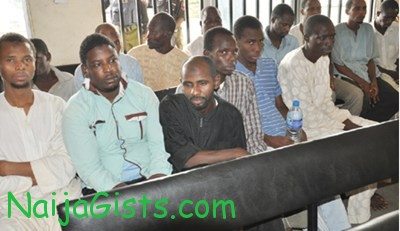 As at the time of this report 89 top Boko Haram members have been detained at the Criminal Investigation Department of the Nigeria Police Force at Area 10, Garki Abuja where a top Boko Haram suspect, Mohammed Kachalla escaped this week.

A security source confirms the escaped Boko Haram member is Mohammed Kachalla who escaped while receiving treatment at an undisclosed hospital.

He was escorted out to say his prayers for the Eid-el-Kabir celebrations before his escape was aided by unnamed police officials who were looking after him at the hospital.

Mohammed was arrested in January of this year inside the Borno State Governor’s lodge along with Kabiru Sokoto, a top Boko haram leader.