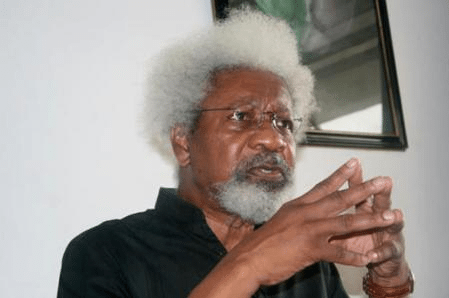 His position contradicted the policy stance of President Goodluck Jonathan whose government has confirmed that “back-channel” talks with the group are ongoing.

“When I say, ‘don’t talk to murderers,’ that is exactly what I mean,” Soyinka told foreign media at an international conference in Lagos.

“Don’t talk to mass murderers. Don’t talk to those who have made the killing of innocent people their philosophy,” he added.

Soyinka described the violence blamed on the Islamists, which has included attacks on security forces, government officials and Christians in church, as “completely out of control.”

“Then you, the assaulted, say, ‘please, come and talk to us. Please, we don’t know what you want’ … What kind of language is that? That is the language of abysmal appeasement,” he said on the sidelines of the Kuramo Conference on development.

Nigerian security forces have so far been been unable to stamp out the violence and have themselves been accused of massive abuses in combatting the Islamists.Amnesty International has charged the military with carrying out summary executions, particularly in the northeast where Boko Haram is based, and Human Rights Watch has said the military could be guilty of crimes against humanity in combatting the group.

“There has been the condemnable scorched earth policy of the military,” Soyinka said, adding that he believed that such killings had occurred.

Africa’s first Nobel literature prize winner however described the insurgency as a “security issue” that posed a new kind of challenge for Nigeria’s military.Violence linked to Boko Haram is estimated to have claimed 2,800 lives since 2009, including killings by the security forces, with the worst violence concentrated in the mainly Muslim north of Africa’s most populous country.The group has said it wants to create an Islamic state in the north, but its demands have continuously shifted. (PM report)