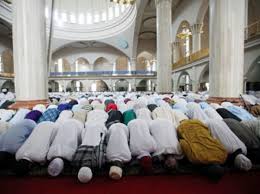 A predominantly Muslim community was attacked on Sunday in Jos South LGA of Plateau state during Ramadan prayers . The attack carried out by some suspected  Boko Haram terrorists injured 3 worshippers.

The spokesperson of the Special Task Force on Jos crisis, STF, Ikedichi Iweha, confirmed the incident to journalists via phone on Monday.

Mr. Iweha stated that the situation was under control.

The incident, according to witnesses, occurred at about 9:00 p.m.

One witness, Bala Mohammed, said the worshipers were observing “tarawi,” a prayer said after the night prayers during Ramadan.

Mr. Mohammed, who is the secretary, Bukuru Elders Committee, said the gunmen opened fire on a mosque in Bukuru Town.

He alleged that the attackers were from a neighbouring community, Gyel.

“We, the Bukuru Elders Council are calling on the federal, state and local governments to intervene.”

Two of the victims shot by the suspects, Lawal Muhammad and Bashir Iliyasu, at the time of filing this report, were said to still be receiving treatment at an undisclosed hospital, while the third victim has been discharged.