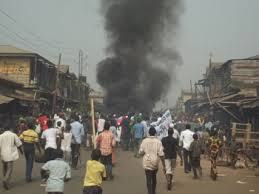 A suspected suicide bomber has been arrested in connection to an attempted suicide bomb attack at a mosque in Yartabki village near Funtua LGA of Katsina State.

According to Katsina State Police Command spokesman, Aminu Sadiq, a man was arrested at the scene of the attack with 2 mobile phones and other explosives he planned to use in the attack.

Worshippers at Dariqa mosque in Yartabki village, about 15 kilometers from Funtua were scared when they spotted a black polythene bag inside the mosque in the morning.

They quickly called the police but the explosives went off before police arrived.