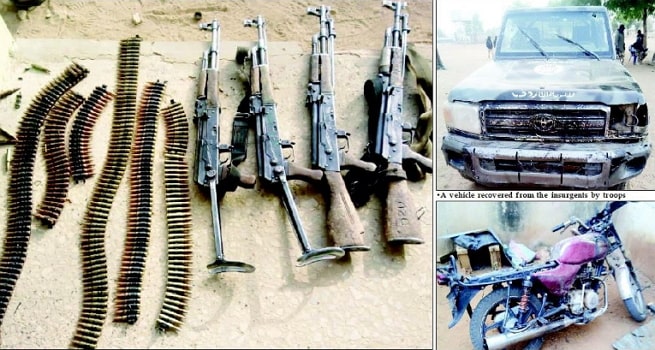 The military has lost an officer and 3 soldier in a fire fight between the troops and Boko Haram terrorists at 27 Task Force Brigade at Buni Yadi in Gujba Local Government Area of Yobe State.

In a statement yesterday in Maiduguri, the Borno State capital, Army spokesman Col. Sagir Musa said scores of terrorists in gun trucks attempted to attack a Buni/Yadi military base on Saturday evening.

“Unfortunately, an officer and three soldiers lost their lives during the encounter,” he said.

Musa added that five soldiers were injured and were receiving treatment in the brigade.

The spokesman said during the gun battle, five Boko Haram terrorists were killed while dozens escaped into the bush in gun trucks and weaponry with gunshot wounds.

According to him, nine AK-47 rifles, an anti-aircraft gun and ammunition were recovered in the battle.

“Though the terrorists appeared prepared for the attack – as they approached the military location in four gun trucks, a mine resistant ambush protection, one MOWAC and assorted arms and ammunitions – but they suffered heavy losses.

“Five of the terrorists were effectively deleted.”

“The Chief of Army Staff, Lt-Gen. Tukur Buratai, has lauded the successes recorded by troops in recent times. The operations were in Forward Army bases in the Northeast.”