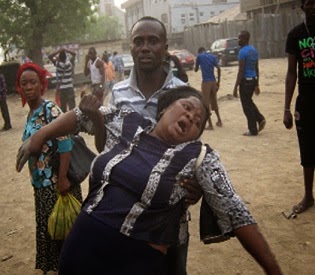 Boko Haram terrorists on Sunday bombed a bar and brothel located near a major military base in Mubi, Adamawa State. Preliminary reports disclosed that at least sixty people died in the attack.

Two security sources in the area told SaharaReporters that a horrendous explosion rocked the bar and brothel which usually teems with civilian and military patrons. The explosion happened close to 6 pm. Nigerian time, both sources said. One of our sources said none of the casualties was a soldier, but the other stated that it was too early to determine whether any of the dead were soldiers.

The bombed facility is a short distance away from the headquarters of the Special Operations Battalion (SOB) of the Nigerian army in Mubi. The battalion is at the center of the Nigerian government’s counter-offensive against Boko Haram’s increasingly daring attacks on military and civilian targets.

Soldiers based in Mubi frequently join civilians to eat, drink and dance at the watering hole, our sources said, adding that military commanders generally warned soldiers not to stay at the joint past 4 p.m.

In recent weeks, Boko Haram has carried out deadly attacks in the northeast Nigerian states of Adamawa, Borno and tone, despite the Federal Government’s declaration of a state if emergency in the three states.