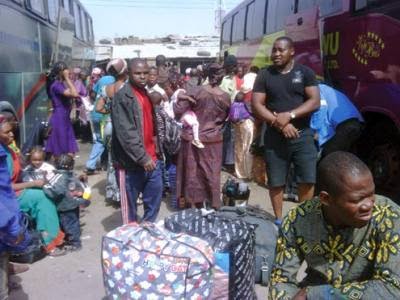 The leader of the Movement for the Actualization of the Sovereign State of Biafra (MASSOB), Chief Ralph Uwazuruike, yester­day gave what he called last warning to all Igbo resident in the northern part of Nige­ria to leave the zone or face dire consequences.

Uwazuruike gave the warn­ing in Okwe near Okigwe, Imo State, after an emergency meeting with leadership of the movement. He said the direc­tive had become necessary to avoid further loss of Igbo blood in the North due to the increas­ing bloodletting by Boko Ha­ram insurgents.

He said the pronouncement of a prophet was not needed for any Igbo man or woman to know that Nigerian security forces could no longer guaran­tee their safety since the insur­gents had not relented in their wicked bloodletting activities. He said anybody who disre­garded the last warning would face the consequences.

The MASSOB leader con­tended that every Igbo had a community in the South-East, saying it would be better for them to die in their fatherland than to be killed by Boko Ha­ram in the North.

He restated the commitment of the MASSOB to actualise the sovereign state of Biafra through non-violence, saying the movement would not be cowed to silence.