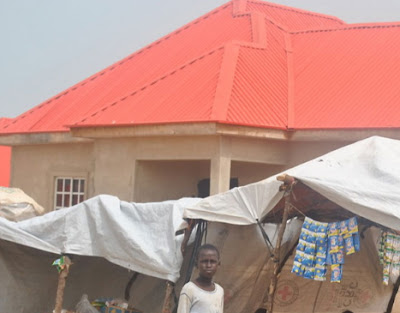 In a statement released by Lt Colonel Kingsley Samuel on behalf of Operation Lafiya Dole Theatre Commander, the Nigerian army confirmed that some Boko Haram suspects had infiltrated into Pompomari Bye Pass.

A search operation is currently ongoing to fish out the suspected terrorists now living near a building hosting UN staff.

“As part of ongoing counter insurgency operations, the Theatre Command Operation LAFIYA DOLE has been conducting several clearance as well as cordon and search operations in urban and rural areas within the Theatre. The clearance operations effort has been yielding several successes.

It has forced the Boko Haram Terrorists (BHTs) to change tactics and resort to employment of suicide bombers to target military locations and the populace. This necessitated the need to intensify Cordon and Search in Maiduguri metropolis and environment.

“In the last one week cordon and search operations were conducted in Jiddari –Polo, Muna Garage, Jakana amongst several other areas. On 10th August 2017, Theatre Command received information from one of its credible sources that some high value BHT suspects had infiltrated into Pompomari Bye Pass. It therefore became expedient to take preemptive action by combing the general area through a cordon and search operations.

The operation was successfully conducted as over 30 houses were searched. One of such included a property which was said to be occupied by United Nations Staff, although the property did not carry a UN designation. On the whole, operation in the general area was successfully concluded but no arrest was made because the suspects were not found.

“The command wishes to assure the general public that these operations are being conducted to safeguard lives and properties but not targeted at any individual or group. The general public is cautioned to avoid peddling rumors which may cause disaffection and to remain law abiding”.