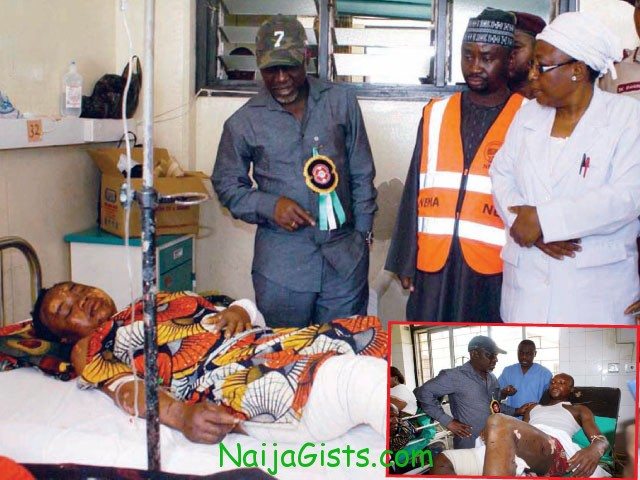 Few of the injured victims

Once more the members of the Islamic fundamentalist sect, Boko Haram, have proved to us all that they are still as potent despite the onslaught against them by the state. naijagists.com

A day after the Chief of Army Staff, Major General Azubuike Ihejirika confirmed the death of three soldiers of the joint task force and the killing of more that 50 adherents of the sect in a deadly operation against the fundamentalists in Yobe, the group mobilised and struck the following day which was Christmas Day, bombing churches in Madalla, Niger State and Jos, Plateau State. They also attacked the headquarters of the State Security Services, SSS in Yobe State.

After the dust settled at St. Theresa’s Catholic Church, Madalla and the Mountain of Fire And Miracles Ministries in Jos, 10 worshippers lay dead while an SSS operative was killed in the bombing of its headquarters in Yobe.

With its action on Christmas Day, the group has shown that no amount of pleadings can stop it from its mission to destroy the country. By attacking churches with Christians worshippers on a festive day like the Christmas, Boko Haram has shown that it will stop at nothing to cause anguish and sorrow in the land.

We want to align ourselves with the outrage and condemnations expressed by Nigerians as well as the international community after the bombings and to implore the government to wake up to its responsibilities by reining in this murderous sect. The killings must stop.

It is not enough for the Jonathan administration to condemn the sect after another bombing campaign and reassuring Nigerians of his resolve to provide security for them. We believe the president should go beyond this usual rhetoric and mobilise resources at his disposal to tackle this Boko Haram menace.

We believe the president has been too soft in his approach towards tackling this group and something urgent should be done to stop them before they succeed in their evil plan to destroy the nation.

It is the soft approach adopted by the administration that had emboldened the group to continue its murderous mission.

We urge the government to declare an all out war on the sect and bring their financiers to book. We do not believe that security agencies do not know those sponsoring this group. We think what is needed is the political will to tackle them.

The president should act before the situation gets out of hand. His timely intervention is needed because Christian leaders in the North have already told their members to defend themselves against attacks by the fundamentalist sect.

This administration should not allow the current crisis to degenerate into a religious war between Christians and Muslims because no nation can survive two civil wars.