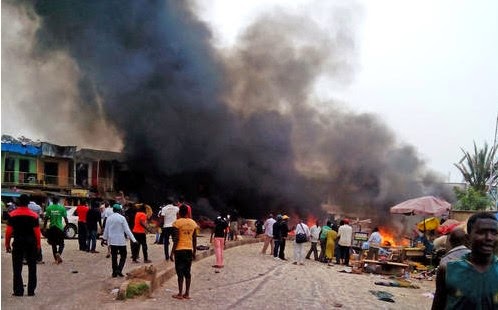 This morning around 10:30am , the suspected suicide bomber approached a First Bank ATM on a parked motorcycle but was stopped by security operatives on duty.

In the course of argument, a bomb went off inside the plastic bag on the parked motorcycle killing all the people at the ATM including the suicide bomber.

“A man came on foot to this ATM where a large crowd was taking turns to withdraw money,”
The man tried to leave a black plastic bag on a parked motorcycle nearby but was stopped before he could leave by locals who said leaving parcels unaccompanied was prohibited following recent unrest in the area.
“It was while they were talking to him that the bomb exploded. I saw at least 10 people that looked dead,” said Lamara Ibrahim, who was at the scene.

Another witness identified as Musa Usman gave a similar account of the attack and estimated that several customers at the ATM were killed instantly.