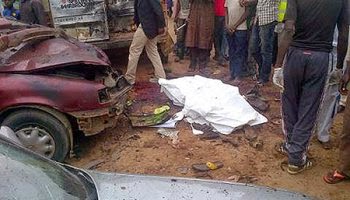 This afternoon, a Boko Haram suicide bomber blew himself up at a popular bus park in Biu area of Borno state killing at least 18 people.

The second bomber was shot dead before he could detonate his explosives.

According to eyewitnesses, the 2 men entered Tashar Gandu Motor Park and joined passengers before the explosion went off.

Vigilant passengers who saw the 2nd bomber struggling to set up his explosives notified authorities who shot him dead instantly.

A civilian JTF member, Babagana Kyari said 18 people died in the attack while several others were injured.

He said the death toll is likely to rise due to the severity of the injuries the explosion inflicted on some bus passengers at the station today.