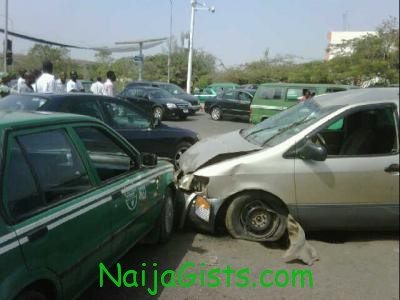 At least 5 people were injured when a bullion van, on Thursday, caused an accident at the UTC Market Junction in Area 10, Garki District of Abuja. naijagists.com

Four vehicles were also damaged in the multiple crash.

Stephen Ogan, an eye witness at the scene, he said that a woman driving a Toyota Sienna lose control as she tried to avoid crashing into the bullion van.

“The woman lost control due to rough driving and harassment from this bank van and ran through the pavement and over four other vehicles at the other lane,” he said. “She even hit a pole and carried it across the road. We thank God that there are ??no passengers at the bus stop when the vehicle ran through. It would have been a different story.”

According to him, the van and its police escort raced away from the scene immediately after the accident; as passersby evacuated the wounded and took them to the nearest hospital.