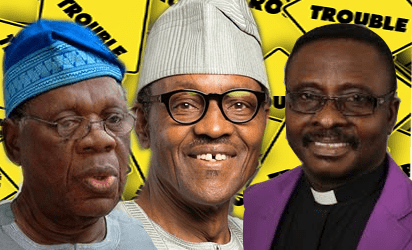 The Christian Association Of Nigeria National Executive Committee (NEC) has dissolved the Nigerian Christian Elders Forum after a panel set up by the committee concluded an investigation into allegations of misconduct leveled by the NCEF against the CAN President, Rev Samson Ayokunle.

The elders forum had in a memo titled ‘NCEF Protests: Is NEC of CAN Guilty of Negligence?’ in May, alleged that when Ayokunle led a delegation to meet President Muhammadu Buhari on November 10, 2017, the leadership of CAN received N40m as “transportation money.”

However, the CAN executive committee, in an advertorial published in The PUNCH on Friday, said it had investigated the claims and upheld the leadership of the apex Christian body.

It said its enemies got hold of the vice-president of the association to levy accusations against his principal in order to bring him to disrepute before the world and the association.

The statement said, “CAN leadership became very concerned and set up a committee to investigate all allegations against the CAN president. While the CAN president made himself available to the panel with documentary evidences, his accuser, the CAN vice-president, refused to appear before the committee in spite of all attempts made to ensure his appearance.”

The NEC, at its November 20 meeting, unanimously applauded the CAN president for his achievements, while dissolving the NCEF.

The NEC said, “The meeting ended with the entire house passing a vote of confidence (sic) in the CAN president, Rev. Samson Ayokunle, and urging him to forge ahead with his good work in CAN (sic).

“That CAN immediately dissolves the Nigerian Christian Elders’ Forum and forthwith dissociates completely from the NCEF in view of the incongruous and unacceptable operations manifested consistently by the group.