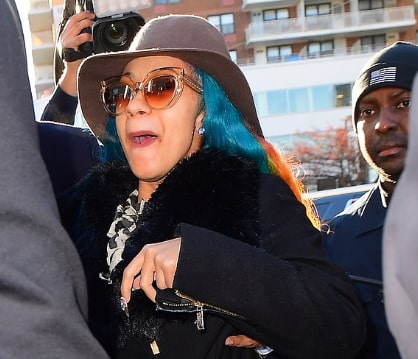 Rapper Cardi B briefly appeared in a New York criminal court on Thursday over her alleged involvement in a strip club brawl.

The 26-year-old artist signed the renewal of two protection orders against the alleged victims, which bar her from making remarks on social media that could be deemed threatening to them.

Cardi B strolled into the Queens basement courtroom in high spirits, sporting a long poncho-style fur coat with a matching hat, pointy heeled boots, distressed jeans and bold taupe-framed sunglasses. Her long neon yellow-green nails were on display as she clutched her demure black purse, despite the icy weather.

The star, whose real name is Belcalis Almanzar, is due to appear again in court on April 4.

On August 29, Cardi B was in the Angels Strip Club in Queens when her group reportedly lobbed bottles, chairs and a hookah smoking device, which police said bruised a female employee in the legs.

In October, police charged her with one count of assault and two counts of reckless endangerment over the incident.

US media reports say she allegedly ordered an attack on two sisters working at the club because one of them slept with her husband, the rapper Offset.

In December, she said she and Offset had separated. Prior to Thursday’s minutes-long court appearance, rumors were swirling that the pair were back together.

“We’re working things out, baby,” she told a throng of journalists as she swooped out of the courtroom.

The couple secretly married in September 2017 and their daughter, Kulture, was born in July.

Cardi B is one of US music’s hottest stars thanks to the runaway success of her song “Bodak Yellow,” which touches on her past life as a stripper.

She is no stranger to controversy — she was involved in a fracas with fellow rapper Nicki Minaj at New York Fashion Week in September, later taking to Instagram to say that the older Minaj had questioned her parenting skills.

At the Grammys in February, Cardi B will vie for two of the most prestigious awards — Album and Record of the Year.

Continue Reading
You may also like...
Related Topics:cardi b, court, criminal, new york