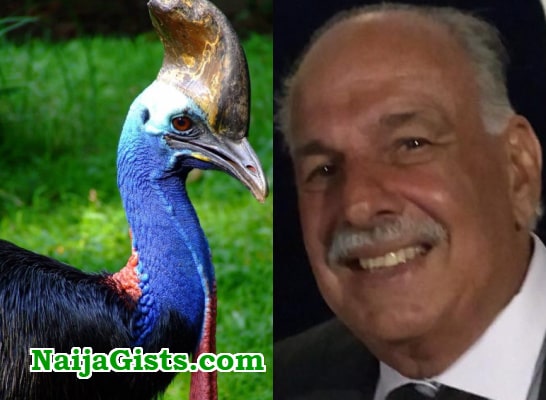 The creature called a cassowary — boasting long, dagger-like claws, standing as tall as a tallish person and sporting a truly foul disposition — will be auctioned Saturday, two weeks after slashing to death 75-year-old exotic animal lover and breeder Marvin Hajos.

Hajos was raising the flightless bird, which has a blue face and a ridge atop its head, and other exotic animals on his property in Alachua county in the north central part of Florida.

He died April 12 when he fell near the cassowary pen and was attacked by the bird.

A total of around 90 animals that Hajos owned will be auctioned off, said Scotty Wilson, the auctioneer at Gulf Coast Livestock Auction in Madison, Florida.

They include brightly colored macaws and critters called marmosets, or pocket monkeys, primates which are only five to six inches (13 to 15 cm) long, said Wilson, who knew Hajos for years.

“Marvin was a very beloved figure and the exotic animal community around here is small but close knit. So I imagine we will have a strong turnout for the auction,” he told AFP.

There is no starting price set for the cassowary and Wilson declined to say how much it might fetch.

In the event no one wants it, several conservation groups have already told the auction house they will take care of the cassowary.

Proceeds will go to Hajos’ widow and other family, said Wilson.

“Marvin left instructions to the effect that if anything ever happened to him, the animals were to be sold immediately because she did not have the means to take care of them,” Wilson said.

Cassowaries are the world’s most dangerous bird, according to the San Diego Zoo website.

They are similar to emus, can grow to nearly six feet tall (1.8 m) and weigh up to 170 pounds (75 kilos) in the case of females and somewhat less for males, according to the website.

With powerful legs, they can jump seven feet straight up in the air. Only ostriches are heavier in the world of birds. Cassowaries can run up to 31 miles per hour.

The birds are native to Australia and New Guinea.

World Longest Vegetative State: Mother Wakes Up 28 Years After Sacrificing Self To Save Son In Accident
Python Snake With 3 Eyes Found In Australia Dies (Photos)