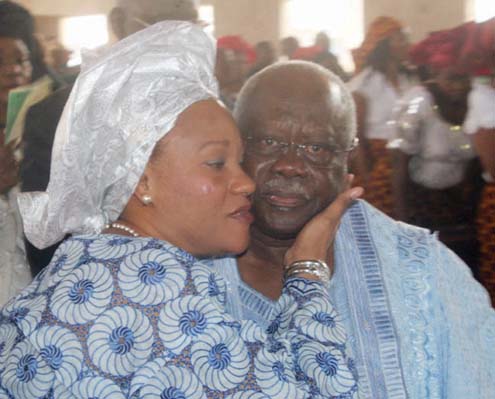 •Chief Olabode George and wife, Roli, embrace each other in church during his 66th birthday service, yesterday

Ex-National Deputy Chairman of the People’s Democratic Party, PDP, Chief Olabode Ibiyinka George had ample opportunity to reply the cleric who upbraided him during his thanksgiving service at the Cathedral Church of Christ, Lagos Island on 26 February when he was released from Kirikiri Maximum Security Prison after serving 18 months jail term for contract splitting.

During a service held yesterday at St. Paul Anglican Church, Kirikiri, Lagos to mark his 66th birthday, Bode George berated the cleric for querying his decision to come to church for thanksgiving immediately he was released from prison.

After exonerating himself from the charges levelled against him and blaming his traducers for his unjust incarceration, Boy George, as he is popularly called by his numerous admirers fired the last salvo: ”In conclusion I want to talk about a man of God who ought to know better. I want to talk about the man who hopefully should know that the House of God is a House of worship where we all give glory and supplicate before God Almighty. This cleric inexplicably questioned my presence in the House of the Lord after my liberation from the prison.

“The young fledgling cleric who was in form four when when I was governor of Ondo State apparently did not understand the defining corpus of Thanksgiving and Offering, the very summative content of the mercy, the grace and the love and the Eternal Truth of Jesus Christ of Nazareth.

“The young cleric repeatedly wondered why I had come to worship at the altar of the Almighty God after 18 months of unjust incarceration. I looked at the cleric with a puzzled gaze. I was naturally bemused. I still cannot fathom the absurdity of the cleric’s enquiry. Pray, where else would I thank God for His protection and mercy? Pray, where else would I demonstrate my own devotion to the living God, the Eternal Rock of Ages? Surely, not at the accursed aboriginal shrine of the lost unbelievers.” In his sermon at George’s thanksgiving on 26 February, the presiding cleric, had asked George to go home and sin no more.

He added: “If you are involved in any shady deal; If you are found anywhere elections are rigged and partake in any form of manipulation, it means that you have not learnt anything from your experience,” the cleric told George and his large supporters who thronged the church to celebrate the freedom of the PDP chieftain. From his reaction yesterday, it was apparent that Boy George was not comfortable with the cleric’s admonition and waited for an opportunity to hit back at the young cleric who he claimed was in form four when he was the governor of Ondo State. (pm news)