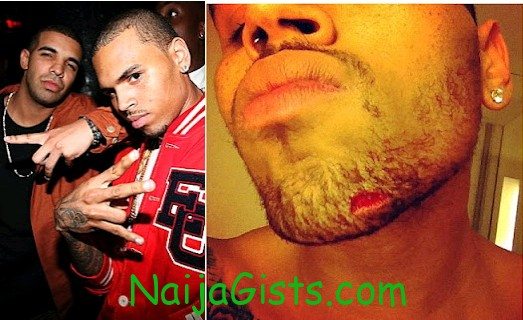 On the night of Wednesday July 13th, 2012, Chris Brown and Drake apparently got into a bloody fight over Rihanna. naijagists.com

We learnt Drake returned the bottle with a note attached to it.

The note reads “I’m f**king the love of your life. Get over it.”

According to an eyewitness report, Chris Brown went over to Drake’s table to confront him, and before anyone could stop it, fists and bottles started flying all over the place.

After the fight, Chris brown was spotted with a bloody chin.

5 people were reported injured in the fight, including Chris who later tweeted the above photo of his injury, along with the message; How u party wit rich n**** that hate? Lol… Throwing bottles like girls? #shameonya!”