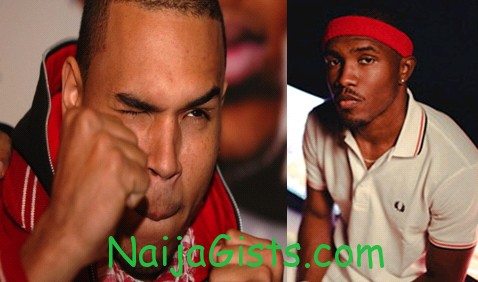 As we speak, the multiple award winning singer is being investigated for assault in Los Angeles.

According to TMZ, the fight started outside the Westlake Recording Studio.

Frank Ocean who said he got punched by Chris Brown took to his Twitter page to express his frustration and he said:

“Got jumped by (Brown) and a couple guys“.

He reportedly suffered a finger cut.

In June of 2012, Chris Brown got into trouble after he allegedly punched another hip hop singer, Drake in a fight at a New York nightclub.

According to The Province, 23-year-old Chris Brown remains on probation for the attack on Rihanna and is due back in court on Feb. 6 to update a judge on his progress. Prosecutors have raised concerns about records showing that Brown has completed his community labour obligations.

Chris Brown insists he didn’t punch him but witnesses at the scene alleged he punched him first.