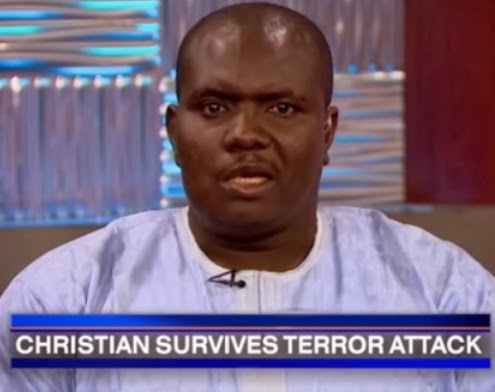 Pictured above is a Nigerian christian man named Habila Adamu from Yobe State who recently escaped a gunshot attack by Boko Haram terrorists who wanted him to deny Christ and convert to Islam.

Habila claims he was shot in the head with an AK 47 rifle but he survived it.

After surviving the gunshot attack to his head, Adamu narrated his ordeal to a foreign christian group.

He claims the terrorists targeted him because he is a Christian.

“They wanted me to deny Jesus. They want to ‘Islamitize’ Nigeria. That is why they are targeting Christians,” he said in a CBN video posted on YouTube.

“If you agree to deny your faith you will be safe. If you don’t agree to do it, they will kill you,” he added.

And that is how he answered why he chose to stand his ground and refused to deny Christ.

“Christ did something for me and all the people in the world. We are sinners! We are condemned criminals! We are supposed to die! But He took all these burdens! He paid for our debts! He died for us! Why can I not submit to Jesus? That is what I did. I stood for him!”