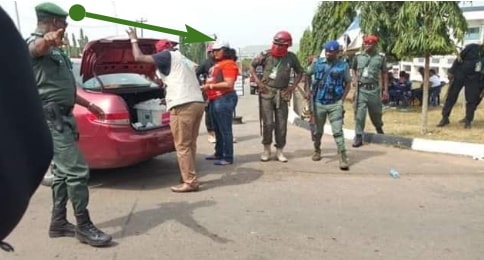 According to TV Continental, a woman has been arrested after about 5000 PVCs (Permanent Voters Cards) were found in her car.

As seen in the above photo, the woman said to be a civil servant couldn’t give a reasonable explanation for being in possession of the items.

In preparation for tomorrow’s election in the state , the Independent National Electoral Commission, INEC, has deployed 1315 vehicles.

Trucks loaded with non-sensitive electoral materials were stationed within the INEC premises ready to be moved to the various local government areas in the state.

INEC in Abia state said it has seamlessly relocated all collation centres in the state from the premises of local government area headquarters to neutral places in line with the commission’s policy.

2 Boko Haram Suspects Carrying Car Loaded With With Weapons Arrested, Another Killed By Vigilant Citizens
Cultists Disrupt Valentine’s Day All Night Celebration Because They Were Not Invited