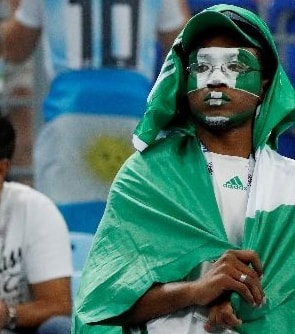 Former Catholic pontiff, Pope John Paul II, once said: “Among all unimportant subjects, football is by far the most important”. Without any doubt, football is a global crowd puller, and presently the game’s most amazing spectacle, the FIFA World Cup, is on-going in Vladimir Putin’s Russia.

Since Uruguay hosted the first edition of the World Cup in 1930, during the era of revered FIFA President, Jules Rimet, the competition has continued to grow in leaps and bounds. From a 13-team event with which it started in 1930, it grew to become a 32-team affair during the1998 edition in France. Today, the World Cup commands a global TV audience in excess of one billion.

The USA ‘94 edition of the World Cup was spiced with several innovations. For the first time in the game’s history, football matches were hosted in various cities across the country. In terms of economic benefits, the USA ’94 edition equally marked a huge turning point in the history of the event. In Los Angeles, where the final match between eventual winner, Brazil and Italy took place, the city’s economy benefitted to the tune of $623 million. The cities of New York, San Francisco and Boston equally made combined revenue of one billion and forty-five million dollars in the course of the competition. In terms of job creation, over 1,700 part-time jobs were created in the city of California alone during the preparation and duration of the tournament.

The 2006 World Cup hosted by Germany was also a massive economic success. For instance, German tourism sector reportedly recorded a revenue increase in excess of over $400 million over the month of the World Cup alone. Similarly, about $3 billion was further injected into the German economy, in merchandise such as jerseys and other stuffs regarding the cup. Equally, over 500,000 new jobs were created before, during and after the competition. Hotels, restaurants, tourists’ centres and bars were full to capacity at all hours of the tournament, while over 15 million more spectators arrived in Germany than was initially anticipated.

Without a doubt, football has become a money spinning sport across the globe. The organisation and management of football in Europe, for instance, is a multi-million dollars venture with all the teams running other sports related businesses. Indeed, all sorts of professionals-doctors, physiotherapists, psychologists, grass men, scouts, etc. are employed by the various teams in their drive for soccer glory. Therefore, football, in Europe, has gone beyond the mere recreational activity that it is in Nigeria. As a result of the excellent manner it is managed in Europe, youths across the continent have found in football a means through which they could use their talents to escape poverty. Thanks to football, players such as Christiano Ronaldo, Lionel Messi, Wayne Rooney, Cesc Fabregas, among others, have become multi-millionaires before they clocked age 21.

However, some critics have labelled the World Cup as a misplaced event that showcases unnecessary opulence in the face of abject poverty across the globe. Before the 2014 World Cup hosted by Brazil, opponents of the World Cup claimed that the over $14.5 billion spent by the country to host the competition could have been used to address the country’s rising poverty situation, education, healthcare and transport. Prior to the event, a survey revealed that 61 percent of Brazilians were of the belief that hosting the World Cup was a “bad thing because it takes money away from public services.” Only 34 percent saw it is a “good project because it creates jobs.” The National Court of Auditors of Brazil concluded that public spending on the World Cup would be “enough money to pay the entire country’s annual Bolsa Familia [social welfare] bill twice over”.

There are multiple revenue streams that exist for organizers, including gate receipts, merchandise sales, sponsorships and licensing agreements, but by far the biggest income flow comes from television rights. However, the governing bodies behind sporting events are taking an increasing share of these spoils, making it harder for even the most efficient local organizers to make money.

According to experts, hosting the World Cup or any other major sporting event can boost a nation’s economy by attracting tourists, initiating important infrastructure projects and showcasing countries and cities as good places to do business. But the costs of achieving those noble goals appear to outweigh the economic benefits they produce. Before South Africa 2010 World Cup, around 450,000 tourists were anticipated to be in the country for the tournament.

In the end, only two thirds showed up. Despite the reduced numbers, visitor spend increased by almost a quarter, but at a cost of acquisition to the South African government of up to $13,000. For roughly the same amount, the country could have paid the wages of the entire working age population for a week.

In a book titled Soccernomics (2009), Professor Stefan Szymanski and Simon Kuper assessed the economic impact of hosting the World Cup and concluded that it is more of a waste. The duo revealed that Japanese and Korean governments expected that the 2002 Korea /Japan World Cup, which they co-hosted, could enhance their economies by a stunning $26 billion and $9 billion, respectively. However, after the event, there was slight mark of any such increase. The pair, therefore, concluded that hosting sports event does not really translate into prosperity for the people. Rather, fortunes are spent to maintain the facilities, which sometimes give way to decay.

This coupled with several allegations of shady deals between FIFA officials and soccer administrators from countries bidding to host the World Cup, cast serious doubt on the credibility of the competition as a worthwhile event. Indeed, it has been alleged that soccer administrators and politicians in some countries often use the World Cup project to enrich themselves at the expense of the sufferings masses.

From whichever way it is viewed, the World Cup and indeed, football in general, remain a major rally point for youths across the globe. One only hopes that FIFA would look inward to address various administrative issues that could undermine the credibility of the game. In the meantime, we continue to savour the splendour and excitement of the beautiful game by joining the rest of the world a month of scintillating soccer artistry.

About the author: Ogunbiyi is of the Lagos State Ministry of Information & Strategy, Alausa-Ikeja.