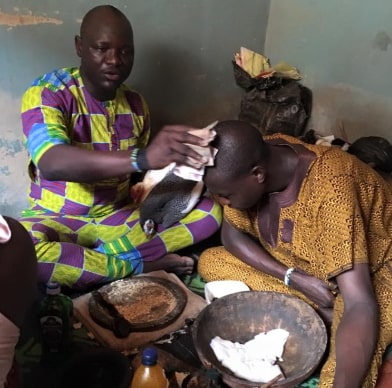 The Dangers Of Etutu, Rituals For Appeasement

The most common method of deliverance from spiritual bondages is Appeasement known in Yoruba language as Etutu. Appeasement is usually a ritual to appease the captor or the oppressor for the release of their captives. Rituals for Appeasement are commonly found at T-junctions, beside the streams, Iroko trees and other strategic locations.

The Victim while going through the process of his deliverance may receive a curse that will make him begin to steal or doing some other shameful acts that was not part of his life before. I have seen people that received healings for a sickness only to become penniless and paupers. It is for the above and other reasons that I decided to discuss Appeasement as means of deliverance from spiritual captivity.

Listed below are the facts: I wish to emphasise that our Lord Jesus does not live at the T-junctions where sacrifices for Appeasement are usually placed. It is the Jezebel version of witches that use T-junction for their meetings. Sacrifices placed at the Junctions are Appeasement for witches. Witchdoctors draw their power from Junctions witches.

They cannot fight them but will only appease them. But the Bible says “Thou shall make no covenant with their gods’’ (Exodus 23:32).

Appeasement is a covenant of submission, subjection and surrender. It is indeed a defection from the side of God to that of Satan.

Appeasement to the idol is a rebellion and rejection of the authority of God. Similar to the way King Saul consulted a medium (witches) and was condemned by God. It is an abomination.

“Thou shalt not suffer a witch to live. Whosoever lieth with a beast shall surely be put to death.’’(Exodus 22:18-19)

“There shall not be found among you anyone that maketh his son or his daughter to pass through the fire, or that useth divination, or an observer of times, or an enchanter, or a witch.’’ (Deuteronomy 18:10)