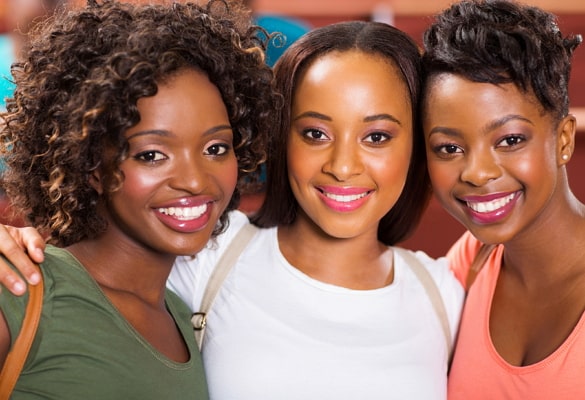 Dear Nigerian Women, Be Wise… Don’t Allow This Hypocritical Society To Turn You Into What You’re Not

Women face some challenges when it comes to being in relationships in Nigeria. First, they are faced with the challenge of being women. It is like being a woman is a curse in this part of the world. You are expected to take everything a man dishes out to you without complaints.

They tell you that as a woman you don’t challenge a man. Whatever a man says to you, you have to endure it. They will tell you that Men will be men. I see this as an excuse for bad behavior and promotion of irresponsibility in men. It’s annoying.

They tell women that as long as their men are not beating them or inflicting them with injuries, they should go on with their relationships even if they are dying inside from emotional and psychological abuse. The way we normalize abuse is sickening.

People see abuse as a normal thing for women in relationships that whenever a woman says she was beaten, people won’t address the animalistic man who dare to hit a woman but they will be quick to ask her what she did. Do these men go about beating their mates who have offended them? No.

It is even worse among religious people, they tell her to pray for God to change him. If his parents couldn’t change him for three decades, how is it possible for his wife to change him? How can a woman change a man who doesn’t even want to change? Will she force the change on him?

Another thing people expect women to do in relationships and marriages is to give up their dreams. A man will meet a woman who is successful in her career, he will be attracted to her drive to rise to the top, and he will chase her, woo her, make her his wife and then suddenly turn around to tell her to quit her job.

He will do this with arrogance claiming that he is the head of the house and she must obey him. He won’t consider her feelings, her life, her dreams and future. All he wants is reduce her to nothing financially so that she can be dependent on him.

And when she kicks against this emotional abuse, people will tell her to be submissive. They will remind that the Bible says women should submit to their husbands in everything. They will conveniently forget the first part of that verse which says that men should love their wives as Christ loved the church and gave himself for her.

It is normal for a man to open his eyes and go into a relationship with high flying career lady or a successful business woman, marry her and tell her to quit her money making venture. People see nothing wrong with this act of wickedness. What gives you the right to stop another human being from living their dreams?

One man told me recently that he believes that every woman must have her own money so as to reduce the strain of expenses on her husband but he says he won’t allow his wife work in an office. He says he will open a shop for her close to their house so that he can monitor her activities.

I asked him if he has asked his wife if she wanted to do business or own a shop, he said no. I told him to stop playing God. You don’t uproot a woman from her career and open a neighborhood shop for her because you are afraid she will be richer than you and become arrogant. Don’t be a destiny destroyer.

I get angry when women say their husbands didn’t allow them work nor do business and these men start misbehaving afterwards. They start treating these women like crap because they know they will get away with it.

Men who do such things are abusers. They take away the financial strength of their women so that they can continue abusing them without being challenged. They turn these women into shadows of themselves while quoting the Bible on one side and clutching to culture on the other side.

Women who give in to this kind of abuse annoy me. After spending years in the university attending lectures, reading without light, and surviving crafty lecturers, one unfortunate human being will turn you into a useless woman and you will agree.

But the most annoying lots are the ladies who obey the rules and commandments of boyfriends as if their lives depend on it. I want to scratch my eyes out when ladies say their boyfriends banned them from working and making their own money.

How can a boyfriend stop a grown woman from earning a living? What kind of bullshit, obedient wife material talk is this? Why do women give men so much power over their lives that these men play them like football, cricket, and basketball and then dump them afterwards?

Why will you move in with a man, stay jobless, have no means of livelihood, have a baby and start complaining that he doesn’t want to pay your bride price?

Why should he when you have become a liability to yourself, your family, your child and your future? Why play the victim after refusing to use your functional brain cells?

Let me say it again, any man who doesn’t want you to make your own money is an enemy of progress. Such a man shouldn’t be in your life to begin with. If he says he doesn’t want a wife who will work or do business, point him to women are happy and have no qualms being housewives.

Women should stop forgetting their brains at home whenever they fall in love. Be alert, stand your ground, create boundaries, learn to say no to abuse and manipulation. Don’t allow any man destroy your life because of marriage.

As a married woman, you are expected to bow down and worship your in-laws. You are expected to swallow their disrespect, insults and name calling. You dare not complain or fight back. You will be branded a bad wife for standing up for yourself. People will remind you that you married your husband’s whole family when you married him. That is just loads of crap.

On the flip side, men can’t stomach half of what their family members dish out to their wives without emitting smoke from their ears. Many men are treated with respect and dignity by their wives’ family but it is sad that the same respect is sometimes denied women because of their gender.

In this society, women are expected to do away with their single friends once they get married. They are told to let go of their past so as to focus more on their husbands and their new home. It doesn’t matter if some of these friends have been with them through life’s many challenges.

But men don’t do that. They don’t discard their friends like used tissue paper because they got married. They still hang out with them, go to parties, and hit different clubs with them but women are brainwashed that their single friends might steal their husbands if they still keep them around.

Some men even break the SIM card of their wives because they believe they have the right to do so and people tell their wives that it is a normal thing. Some women can’t even go out anymore because they are married and still, people claim it’s normal. I don’t know how abuse is normal.

Dear Nigerian women, be wise. Don’t allow this hypocritical society turn you into who you are not because people expect you to conform. Give no room to abusive and wicked men. Live your best life and refused to be subdued by destructive societal expectations.

Continue Reading
You may also like...
Related Topics:family, Husbands, in laws, nigerian, women

Common Relationship Mistakes That Cause Early Breakups
Forget Him. Focus On Yourself And Your Children – Kate Halim Tells Married Women Living With Cheating Husbands